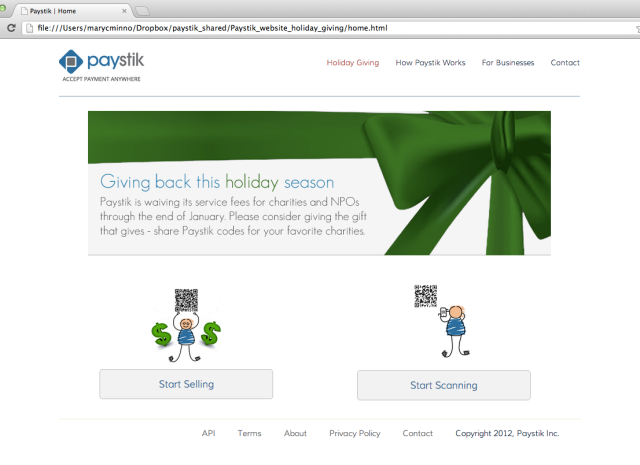 Paystikd, a bootstrapped three-person startup out of a new Stanford co-working space, is starting to power donation campaigns for 6,000 charities this month. The company makes it easy for small businesses and charities to use QR codes for payments.

It isn’t so much a competitor to other payments upstarts like Square. It’s more of a way to make paper billing and direct mail campaigns easier. Charities and businesses can sign-up with Paystik to generate QR codes for their products and campaigns.

Consumers in turn download an app where they can scan Paystik’s codes to send payments. The technology goes live this week in a direct mail campaign for Project C.U.R.E., a non-profit that delivered about $42 million in medical supplies and care globally last year. After going down the charity route this holiday season, the company’s planning to reach out to merchants next year.

There are plenty of mobile payments startups that we’ve covered that rely on QR codes like Doxo, Qriket, DigiMo and even Paypal. Although we haven’t seen one take off yet in the U.S., the company’s co-founder James Ioannidis says that smartphone penetration are making QR codes more viable than they were a year or two ago.

He also says that Paystik’s focus on specific verticals like non-profits and on direct mail campaigns could help the company succeed where other QR code-focused startups have not. But they do face a bottleneck in terms of getting consumers to download the app (which is a serious problem that faces most consumer-focused mobile apps we cover).

“Obviously, the first time is the hardest. But after on-boarding them, we see consumers making repeat transactions,” he said.

Paystik is bootstrapped, and hasn’t raised any venture funding. Ioannidis was the chief technology officer at CourseHero, which collects study documents online for college and high school students. Before that, he was a program manager at Microsoft. The company is based out of the Stanford Venture Studio, which is part of the Graduate School of Business there.