Ousted from Microsoft, former Windows President Steve Sinofsky tweeted this morning that he is on his way to Harvard Business School to teach project management and collaboration, among other things.

First reported by The Next Web, Sinofosky said this on Twitter about his new gig at the Harvard Business School, as well as the writing that he plans to do, too: 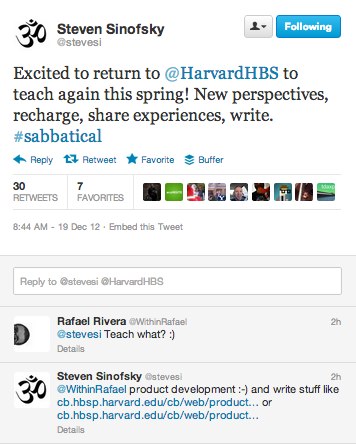 Sinofsky will spend his time at Harvrd as an executive in residence, writing and teaching about product development, planning, collaboration, and more. He cited two papers he co-authored as examples of the writing he plans to do: “Microsoft Office: Finding the Suite Spot” and “Learning from Projects: Note on Conducting a Postmortem Analysis.” Both were published in 1999.

Postmortem analysis? Kind of ironic I’d say in wake of his sudden departure from Microsoft where he had just completed the long, arduous journey of launching Windows 8 and Microsoft Surface. Soon after the Windows 8 launch, the news came from Redmond that he and CEO Steve Ballmer had agreed that it was time for Sinofsky to go.

The official reason Sinofsky left? Microsoft needed someone who could work across the multiple product groups, tie them together and create a more elastic set of services for the new age of business and the cloud. Julie Larson-Green won the engineering gig and Tami Reller took charge of the business side of Windows.

The unofficial (read: real) reason he left? he was a top-down autocrat who had an abrasive style not loved by the brass.

Now that makes me wonder what the hell this guy is going to teach a bunch of students getting their masters degrees. But I give credit to Sinofsky. Teaching is one of the greatest ways to give back to a community. I wish him well.