Descomplica today added its name to a growing list of startups finding support as they look to harness South America’s growing interest in online education. The Brazilian startup, which helps high school students prepare for their university entrance exams, announced this week that it has closed a round of series A financing from Peter Thiel’s Valar Ventures, Brazil-focused investment firm, Valor Capital Group, the Palo Alto-based Social+Capital Partnership and Dave McClure’s 500 Startups, among others.

While the company did not disclose the amount, we’ve learned from sources that it was in the ballpark of $2 million to $3 million. As a result of the round, Valor Capital Group senior VP and former chief of staff for global business development at Google, Antoine Colaco, will be joining the startup’s board of directors.

The U.S. is far from being alone in seeing technology’s potential to help breathe new life into outdated educational systems. Thanks to a fast-growing economy, South America, and Brazil in particular, is quickly emerging as a global marketplace, becoming extremely attractive to both investors and entrepreneurs in the process. On the educational front, with an expanding middle class, schools across the region are struggling to keep up with increased demand and prepare their students for university and life beyond.

The region’s young people are increasingly looking to the web for alternatives, both in degree programs and language training. Open English recently landed $43 million from Insight Venture Partners and Redpoint Ventures to expand its online English-language learning platform across South America, beginning with Brazil.

Launched in March of 2011, Descomplica is on a mission to help high school students prepare for entrance exams and improve their test scores through online video classes. It’s currently working with more than 30 certified educators who are responsible for creating the content for its classes and tests and answering questions. Like Grockit, the startup wants to give students a more personalized learning experience by identifying areas where they are struggling and give them the tools and targeted content they need to get up to speed.

According to founder and CEO Marco Fisbhen, the startup plans to use its new funding to grow its video library from 2,500 to 10,000 videos, more than double its staff of teachers, and expand its footprint to include all high school grades.

The investment follows a big year of growth for the startup, as Fishben tells us that more than 1 million students used its platform this year, including 100,000 students in a single day during a live-lesson marathon the day before ENEM, Brazil’s top standardized entrance exam. Descomplica has also looked to expand beyond the web of late to make its platform more universally accessible.

Because broadband access is still under 50 percent in certain areas of Brazil, the startup offers its test prep content via DVD, of which it sold 100K this year. The CEO also says that the company was able to reach more than 200K students via an SMS-based, mobile learning project launched earlier this year in partnership with VIVO, Brazil’s largest mobile carrier.

Beyond pre-recorded lessons, Descomplica offers live, streaming classes every day, as well as live tutoring that includes feedback, comments and grades on their students’ preparatory essays, and quizzes and real-time answers.

Fishben says that the startup has also established its price point at $60/year (available in installments of $5/month), which he believes has the potential to disrupt education in Brazil by offering a low-cost, test prep alternative. But, more so than pricing, the CEO says that the key to standing out from the crowd is not by adding “a lot of technological layers” but instead by recruiting the best teachers in the country to make videos for the platform, a la Coursera.

“At the end of the day, it’s not the algorithms that matter,” the CEO says, “but finding a compelling, adaptive way to deliver subject matter from Brazil’s top educators.”

EdTech is beginning to take off in Brazil and across South America, representing not only a huge market opportunity for investors and entrepreneurs, but also an opportunity to help improve education and better prepare students for an increasingly competitive and global workforce. And hopefully improve the region’s educational status quo in the process. 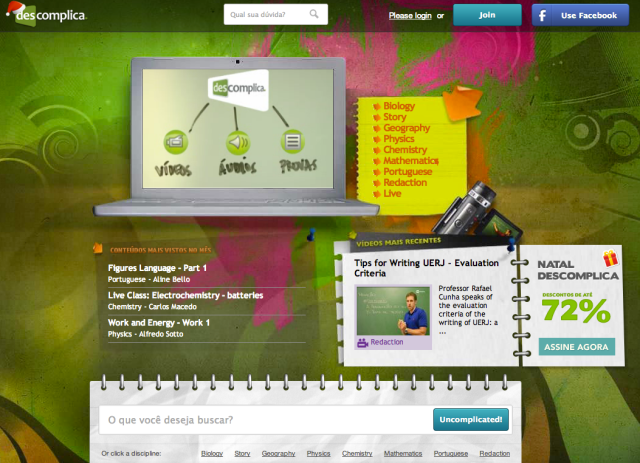