The North American Aerospace Defense Command (NORAD) may have decided to ditch Google in favor of Microsoft for its official Santa tracker, but the search giant is still keeping tabs on the fat man. On Christmas Eve, kids and anyone else with a vested interest in the whereabouts of the gluttonous gift giver from the North Pole can follow his progress using Google’s Santa Tracker. 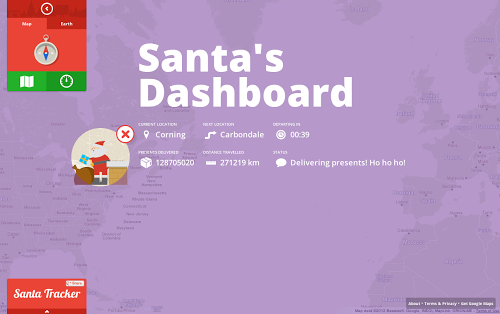 Google announced today that it has also created a Chrome extension that will enable children both naughty and nice to simultaneously browse the web and keep an eye on Mr. Claus and his pack of reindeer. Want to hear “ho ho ho’s” from Santa himself? Sign up for a customized phone call, another offering from Gmail. Unfortunately, you can only request a call, so the only way to reach Santa Claus and tell him to get his creepy little elves off your shelves is through his Gmail account. There’s also no word on whether or not Google will be setting up Jack Skellington alerts.