UberConference, the online, visual conference calling solution (and TechCrunch Disrupt NYC 2012 winner), is today expanding its service to mobile with the introduction of applications for both iOS and Android. The new apps will primarily offer users a way to start a conference directly from their phone.

For those unfamiliar, UberConference, backed by Andreessen Horowitz and Google Ventures, offers a modern take on conference calling, leveraging web technologies as well as an attractive visual design to make the conference calling experience less painful. The previously online-only service introduces an online dashboard showing the profiles for those attending a call, and lets conference organizers handle common pain points like knowing who has arrived or left the call and who’s making all that noise in the background (so they can then mute them).

It also provides several business-friendly features, like local numbers, recurring conferences, call recording, call summaries, custom hold music, participant profiles, Google Apps integration and more. It even does away with the idea of using a PIN to join in a call. 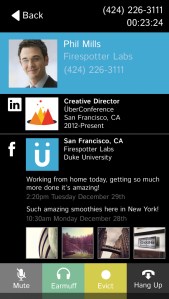 Now on mobile, users can launch the app which then accesses a user’s address book to make it easy to add call participants. To kick off a call, you just tap on a few names and the system will dial out and automatically join the others to the call. Unlike some mobile experiences, which offer a dumbed-down version of the web application, UberConference still allows call organizers access to the majority of the key features found on the web. “You can see who’s on, who isn’t on, who’s speaking, you can click on them, and you have all the same controls with muting and earmuffs and everything else. You can get all the social information, too,” explains Craig Walker, CEO of Firespotter Labs, which makes UberConference. Walker who previously founded GrandCentral, the service that later became Google Voice, has many years experience in the phone/VoIP space, and that shows in the design and functionality of the new applications. 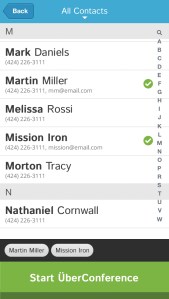 At launch, the iOS and Android apps are identical in terms of feature set.  However, because of limitations on how deeply apps can integrate with the core OS on Apple devices, UberConference takes the user to the phone’s dialer to place the call. It then uses a notification that tells the user essentially to tap the alert to see the call in progress. By doing so, the user can return to the conference. On Android, there’s a better transition process that doesn’t require the user to take this kind of action.

In later versions, the app will also add support for more advanced call administration features, like conference scheduling, for example.

In addition to today’s mobile launches, UberConference is also rolling out “Administrator Access” for UberConference Pro accounts, which allows admins the ability to delegate their account by creating a password so others can schedule and edit calls on their behalf.

Oh, and one last thing – Firespotter Labs is known for its quirky, humorous videos about its various products (which also include restaurant apps Nosh, NoshList and parody app Jotly). Continuing that tradition, the startup released another video today about the new mobile apps, embedded below.