Online video learning platform lynda.com is making a big addition to its management team today, announcing that it has hired Frits Habermann as its new chief technical officer. Habermann joins lynda.com from EA’s PopCap Games, where he was CTO and VP of social game operations and led the global technical growth of the company’s social, mobile and console game, including its most popular franchises Plants vs. Zombies, Bejeweled and BookWorm.

Habermann joined PopCap in April 2010, not long after it released Plants vs. Zombies on iOS. The casual games leader sold to EA in July of last year in a deal that was worth up to $1.3 billion. Habermann’s departure follows a large-scale restructuring of PopCap operations this summer, which led to the layoffs of as many as 100 PopCap employees and saw the closure of the company’s offices in Dublin.

In a blog post at the time, PopCap co-founder John Vechey said that the restructuring had to do with the evolution of the gaming market, as gamers have increasingly shifted from paid to free-to-play games, along with a need to cut costs and increase efficiency. More in Vechey’s post here.

Meanwhile, Habermann has left all of that behind to join one of the first-movers in the online, video-based education space. The company was founded in the 1990’s and has slowly compiled a video library of 1,500+ how-to videos that are taught by industry experts, working professionals and teachers, served up in an online database for a monthly subscription fee of about $25.

In May, we wrote a lengthy piece on how the company had, over time, grown to a paying user base of over 1 million, and saw over $70 million in revenue in 2011 in spite of not having taken a dime of outside investment. While the company may not feature the same sexy interface as some of the younger video learning platforms, it now has over 300 employees and a professional studio that focus on keeping the quality of its video tutorials high.

Since the beginning, long before the Codecademys of the world rose to popularity, the site has served those interested in a technical education, serving up how-to videos on popular apps and software from Adobe, Autodesk and Microsoft — on everything from web design to basic how-to-use-Excel content. This summer, lynda published its 500th course on Adobe apps, for example, and when Adobe released its Creative Suite this summer, lynda immediately had courses and how-to videos ready to go.

With growth headed north, the company has been looking to build out its educational content for developers and engineers and to take advantage of international interest, as lynda.com has long been English-only. On top of that, it’s been poised to take advantage of other platforms, specifically the penetration of mobile devices and social platforms.

That’s where Habermann comes in, as the new lynda.com CTO will help the company pursue growth strategies in cloud infrastructure and to scale on mobile and international platforms. The hire comes at a great time, especially as the CTO is fresh from helping PopCap scale its mobile efforts.

It’s also a great fit considering that lynda has a huge following of its Adobe-focused offerings, as it so happens that Habermann joined PopCap after 20 years at Adobe, where he was instrumental in the development of InDesign. Most recently, he was VP of core technologies at Adobe, where he helped lead the technical development of its flagship products like Photoshop, Acrobat, Illustrator and InDesign.

Habermann says that, along with the company’s founders, he shares a passion for education and is “looking forward to expanding lynda.com’s technology platform to take advantage of the opportunities in mobile, social and international markets.”

The company has seen an array of newcomers enter the space over the years, from Khan Academy to YouTube, and more recent additions like Udemy, CreativeLive and a host of course-creation platforms and MOOCs like Coursera and EdX, as well as technically-focused learn-to-code platforms like Codecademy and Treehouse. To continue to survive and grow in a crowding space, the company will have to continue to accommodate more functionality and content, co-founder Lynda Weinman says, and that expansion into mobile and international markets will be crucial. 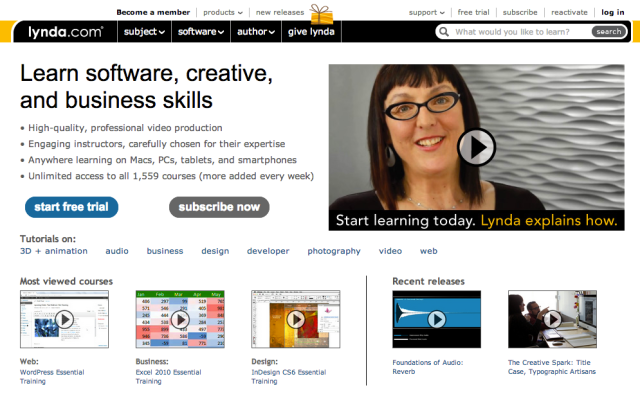