According to Google’s Jeff Huber, Google Maps for iOS is a runaway success, having seen more than 10 million downloads in just 48 hours after its launch.

This is a pretty huge number, and it’s rare that a company as large as Google would share such numbers. The app stands atop the free app leaderboard on Apple’s App Store, clearly suggesting that the people have spoken. They prefer Google’s offering to Apple’s, which is bundled with iOS 6.

We knew it was coming — the question was just when. We hinted that it would be coming before Christmas, and Google waited until the last possible moment to do so, as Apple freezes its App Store over the holidays, when it comes to new releases and submissions.

This is what Huber had to say:

More than 10 million downloads in less than 48 hours after release!

We’re excited for the positive reception of Google Maps for iPhone around the world. Congratulations to the Maps Team on the recognition for the passion and hard work they poured into it, for this release and over the last 7+ years.

If you already have it — thank you, and please tell a friend. Any feedback you have is welcomed, here in G+ or in the app (just shake it). 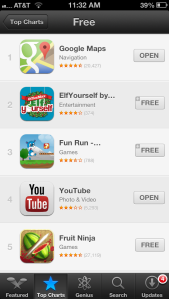 You can read our entire run-through of Google Maps for iOS here, and it seems like the feedback from users has been mostly positive. The Maps team told me that the company will be iterating on it quickly, meaning that some of the features that were left out at launch, such as biking directions, might find its way into the app in the New Year.

The future is bright for Google’s mobile apps, having also released a massive overhaul to Gmail and Google+ on iOS, as well.

The really interesting trend to watch is whether this version of Google Maps will push people to update to iOS 6, who might have waited before. So far, the numbers aren’t showing that.

It looks like the “borg” has found its design heart.