“A location service only gets interesting when you get to a certain scale,” and Foursquare isn’t there yet, says Josh Williams. His check-in app Gowalla wasn’t either, but it was acqhired by Facebook where a quarter-billion people tag locations each month. In an interview, Williams tells me how the Nearby feature he launched on Facebook today shows you that data “through the lens of what’s around you right now.”

“It’s been a year since we’ve been here [at Facebook]. We joined at this time when location services were growing at a pretty amazing rate, but outside there wasn’t much public awareness about just how much people had been using location tagging for checking in and tagging photos and status updates.”

Then Williams dropped a bomb. “Now we’re seeing 250 million of our users tagging locations on a monthly basis — a bit over 800 location tags per second.” 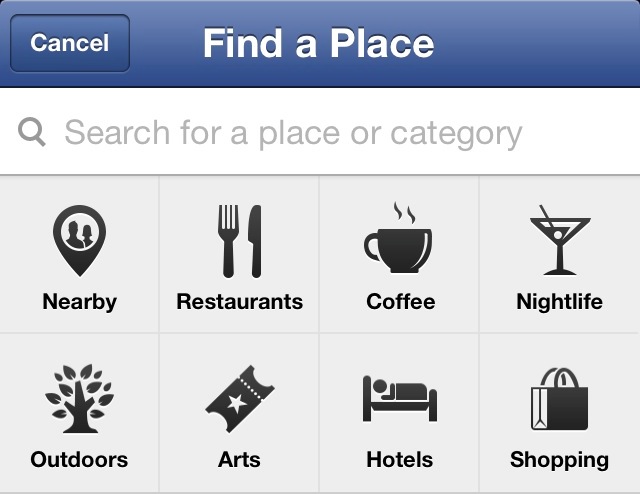 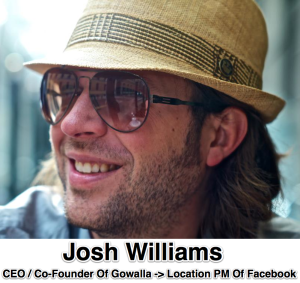 That means in some ways Facebook is about 10 times larger than Foursquare. And for comparison, Yelp has a total for 33.3 million reviews and 83.5 million unique monthly visitors. Facebook’s scale has Williams positively giddy. The CEO and co-founder came from “building a service for a couple million users at Gowalla. We had a density that worked in Austin on good days, or in San Francisco or New York City, but not necessarily everywhere.” If you’ve ever looked at Foursquare for friends or suggestions outside of big, early-adopter cities you know the whole value-proposition breaks down and you can feel a tad alone.

Without data to make helpful recommendations, nobody uses the app, and it doesn’t build its data set. Facebook solved this chicken and egg problem of starting a local discovery service with no users or data by simply building the vacuums to suck in geo-tags first and waiting years before starting to use it for recommendations. “Here [at Facebook] there’s this amazing wealth of photos and stories and checkins that start to paint a picture of what the world is like through your friends’ eyes,” Williams says.

So over the last year, Williams and his squad have set out to build “what a modern location aware service would look like” and it goes way beyond the check in. Williams explains that while Facebook has the data, there was no way to browse it from the perspective of discovering places instead of where friends were currently. “Check ins would hit the news feed and matter for some amount of time, but then they would fall off the feed.” Locked inside these checkins are strong signals for what your friends might enjoy after you leave.

Williams tells me he joined up with some of Facebook’s “internal champions” of location and discovery to form a new team focused on organizing all this location data into something actionable. First, they had to make sure that data was spic-and-span. The team made it easier for users to flag and remove duplicate Places, that way all your friends’ check ins, Likes, and reviews are on the same page. 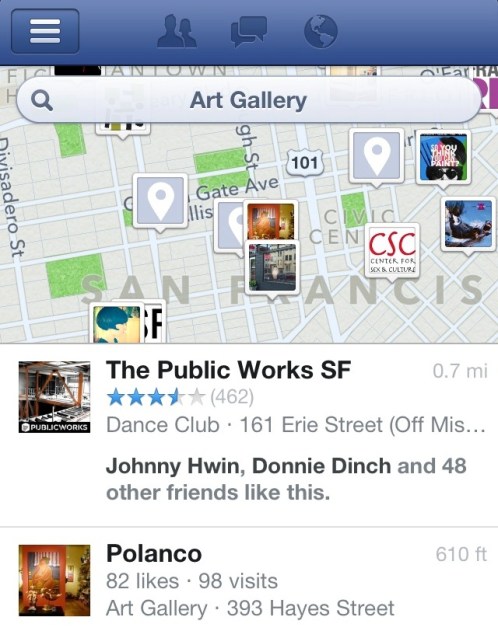 There was also a tough decision to be made about whether to show more popular but well-known places or more hidden gems. Williams says “You’re always trying to find a mix. If I’m coming to New York I want to see what someone says about the MOMA, but I also want to know if a friend found a great place down some alleyway. We’ll find a balance between a fun and easy to use product and serendipity going ahead.”

Considering this is v1, the team did a pretty remarkable job. You can read my full hands-on review of Nearby here, but the takeaway is that it’s tuned well to the mobile use case. You rarely have to type to browse tons of categories of places which are all intelligently ranked based on both ratings and reviews from people you don’t know, and the checkins and Likes of your friends. The killer value-add is that these data sets combine to help you discover great places that are exactly your style.

For example, Williams explains that if you and your friends all have children, seeing that a bunch of them Like a family restaurant and one wrote a recommendation that “this is a good place to take your kids” means you’re confident you can bring your screaming spawn there.

As people use Nearby, its algorithm will improve and Williams says his team is just getting started on features. “We like to joke at Facebook that things are 1% done — but actually we take it pretty seriously. There will be steady updates and improvements in the months to come to tie in some other pieces.”

I’m looking forward to being able to discover Facebook Events in Nearby. “That’s not something we’re bringing out on this pass, but you can imagine how it’d look if you baked it in.” Yelp and Foursquare might know venues, but they don’t know events, or which ones your friends are going to.

Facebook also plans to use its status as a platform for third-party apps to pull awesome content into Nearby. Williams says that “We will continue to give people more ways to discover places by including information shared about places from other applications.” That means Nearby could pull in Instagram photos to give you a look inside a place you might visit, or a park’s page could display popular running routes from Nike and RunKeeper.

Williams says “I have a lot of respect for what Dennis and the crew at Foursquare have been doing. It’s a fun community that I think will continue to exist and thrive, and Yelp has a really unique community itself of people who love gourmet cuisine. These are unique viewpoints.” But Williams wants Nearby to be chameleonic, able to give people recommendations no matter what they’re into. It could make Foursquare seem constrained to just the hip early adopters and their bar-going, while trapping Yelp in a box for foodies. 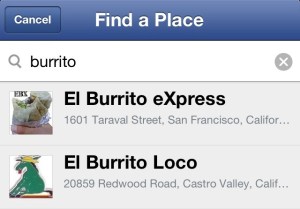 That’s not the to say the fight will be easy. Both competitors have hardcore users who meticulously review everywhere they go. They also have much more granular search, that lets you find “cocktails”, or “pasta” not just bars or Italian restaurants.

But Facebook’s power comes from its scale. Most everyone’s friends are on Facebook, adding geo-tagged posts of all sorts. Few people have lots of friends on that check in on Foursquare or that write Yelp reviews. That means wherever you are Facebook can show you what’s next door, courtesy of who you know.

“The tab has always been called ‘Nearby’, even though it hasn’t always lived up to that feeling. This isn’t just about checking in. It’s about hearing people’s stories through the restaurants they go to, or the museums they visit with their friends. We should be able to help you plan what you’re doing this weekend. Hopefully this is the first step in that direction — a little bit of the here and now where you’re at home or abroad.”