Its name may not be familiar, but Zedge has become one of the most popular Android apps out there. Offering personalized content and game discovery along with free ringtones and wallpaper, the app currently sits in the ninth spot among Google Play’s free apps, placing it between familiar names, such as Netflix and Twitter. Over the last three years, Zedge has seen over 50 million installs on Android devices and now counts over 22 million active users.

Looking to capitalize on the popularity of its Android experience, the company is today bringing its content recommendation and discovery service to iOS with the launch of a new iPhone app. The launch today follows the company’s addition of a mobile games discovery channel in April, which aimed to help Android users sift through the mountain of games available on Google Play to find relevant gaming experiences they’d actually enjoy.

The recommendation engine analyzed a wealth of anonymized behavior data gathered from its users’ interaction with content across its channels (like wallpaper and ringtones, for example) in order to serve them with a list of game recommendations that match their preferences and interest. The apps’ technology was developed to take advantage of machine learning and clustering theory to improve its recommendations over time — the more users interact with its system, the better the suggestions become.

Zedge CEO and co-founder Tom Arnoy tells us that he believes the company’s approach to content discovery and “the years of investment” it’s made on Android will immediately benefit iPhone users. Since implementing its game recommendation engine on Android, Arnoy says that Zedge has seen a “marked increase in user engagement” — to the point where the company now sees 1.5 million daily active users, which he believes is a testament to the improved relevancy and accuracy of its recommendations. 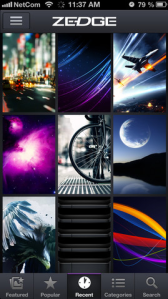 Along with the launch of its iOS app, Zedge COO Jonathan Reich said that the company has also completed a significant upgrade to its infrastructure, providing what the COO hopes will be improved response times and download speeds by streamlining its architecture and by migrating to new hardware. This has all been a part of preparing for its iOS launch, and the company’s plot to make Zedge the “de facto standard for game discovery” on both iOS and Google Play.

While there’s a lot left to be said before it can claim that lofty title, Zedge has been able to gain market share by becoming the go-to place for Android users looking to personalize their devices — with 200 million downloads of its wallpaper, ringtones, and mobile content each month.

The New York City and Norway-based company spent nearly two years building its game recommendation engine and now allows users to receive customized recommendations of content they might like to download, which includes descriptions, screen shots, and ratings. The engine considers handset information, geographic data, clicks, installs and uninstalls, while combining those data points with its own information gained from reccurring usage.

This gives it access to a wide range of personal and demographic data, building a taste profile on individual users, allowing it to target its recommendations with more accuracy than the average mobile discovery engine. This more targeted experience has drawn advertisers like Pocketgems, Ngmoco and Gameloft, Reich says. 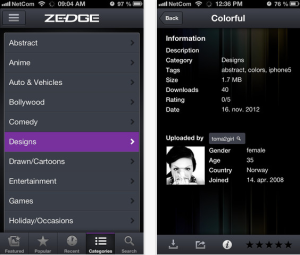 For now, Zedge’s iOS experience is limited to wallpaper, as it plans to move vertical by vertical, adding ringtones and games (and in turn recommendations for each set of content) as it goes. Users can expect ringtones to be up and running in the first quarter of 2013 and games shortly thereafter.

While Apple purchased Chomp back in February to help improve its app search and discovery system, there’s still plenty of room left for improvement. The ecosystem itself still relies largely on Top Ten lists to offer recommendations and relevant discovery, which is limiting and leaves many hoping for a better solution — especially considering the top 25 developers currently constitute half of app revenue in both Google Play and the App Store. That has to change, and Zedge is hoping that it has the tools to help.