Metail, the virtual fitting room startup, has scored somewhat of a coup. Kicking off today, it’s partnering with the UK television broadcaster ITV as part of a fashion segment on the channel’s day time show This Morning. Along with potentially exposing the startup’s tech to millions of viewers, even if it is largely hidden behind the TV program’s own branding, the move suggests that Metail may have a ‘second screen’ string to its otherwise B2B retail bow.

The way the tie-in will work is as follows: In a segment called ‘Takeover the makeover‘, viewers of This Morning are being invited to style the two models featured in the show via a virtual wardrobe and fitting room — powered by Metail — on their PC, tablet or mobile phone and submit the finished look, which will appear on an interactive wall ‘live’ on air and be commented on by the show’s presenters. The most ‘liked’ looks will then be paraded by the models on the catwalk at the end of the program.

“[The] big product innovation here is the live aspect, which as far as I can tell is a major first”, Metail co-founder and CEO, Tom Adeyoola, tells TechCrunch. “I can’t think of any [other] real-time real body shape second screen interactive styling experience – you can genuinely see how the different clothes work on the different body shapes of Becky and Charlie”. 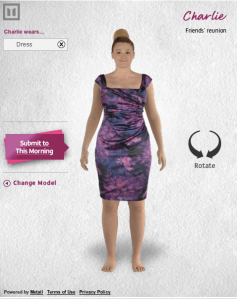 A “real-time real body shape second screen interactive styling experience” it may well be (said with a straight face, I’m sure), but perhaps more significantly, it’s monetizable, too. That’s because users can click through to buy the clothes featured in the virtual wardrobe, generating revenue for both Metail and ITV.

Along with the obvious commercial benefits, Adeyoola says it should prove that the company “can handle high intensity capacity situations”, as huge numbers of viewers are expected to hit the Metail servers at once.

“We’ve delivered a super slick and fast application through work we have done server side, which means that we can deliver a max concurrent user capacity level an order of magnitude several thousand times higher for negligible cost, which was a huge technical achievement”, he says.

Famous last words — or at least let’s hope not.

Presuming all goes well, Metail and ITV are considering making ‘Take over the makeover’ a regular feature, meaning that the virtual fitting room can add a major broadcaster to its list of, otherwise, big name retail partners which include Tesco, Shop Direct, and Warehouse.

“It is a true connected second screen experience – the live show segment doesn’t work without the viewer and vice-versa”, says Adeyoola. “This is part of our strategy to proliferate the creation and use of MeModels beyond pure retail into media and publishing to drive use cases of the technology”.