Salorix has upgraded its social media engagement platform Amplfy with what the company says is improved artificial intelligence that help brands find the social media updates that are worth responding to.

One of Salorix’s big goals is to take customers beyond monitoring their own mentions and a specific set of keywords. Instead, it focuses on specific industries (such as automobiles or electronic goods) and uses AI to identify relevant conversations, to prioritize the comments that come from users who are influential and likely to respond, and to suggest relevant content in the system. For example, a Salorix spokesperson told me that Ford could use Amplfy to get notifications about conversations about muscle cars, point out the updates worth responding to, and suggest a response that would point the user to a relevant page about the Mustang.

With Amplfy 2.0, the AI has improved, said CEO Santanu Bhattacharya, and the company plans to expand into other verticals, too. 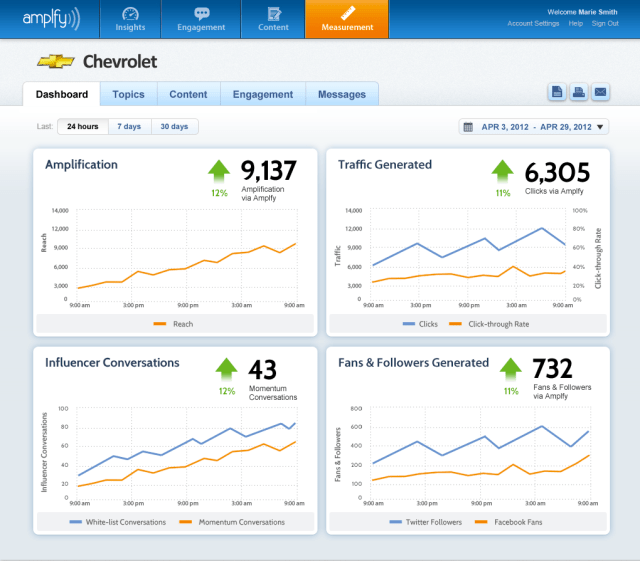 There’s a glut of social media tools right now, but Bhattacharya told me that Amplfy stands out in three big ways. First, he said companies often use multiple products to accomplish everything that Amplfy offers — say, Radian6 for social media listening, then HootSuite for coordinating updates and responses. (Other companies have made similar points trying to sell their products.) On that front, Bhattacharya gave me a quick tour of Amplfy, and I was impressed by the flow from listening to searching for content to posting updates to measuring the results.

Second, he said that most social media listening systems rely on users to enter a list of keywords to monitor, but “your typical brand manager is not a keyword expert” — that’s where the AI mentioned above comes in. Third, he said Amplfy learns as people use it, so that over time it becomes “smarter and more and more efficient.”

Bhattacharya also pointed to a recent report from the Internet Advertising Bureau and The Jordan Edmiston Group identifying Salorix as one of the leaders in improving business intelligence with big data. (The PDF of the report is here, and Salorix comes up on page 18.)