The holidays can be a ridiculously expensive time of the year, and really, who couldn’t stand a save a little more money when buying pricey geegaws for loved ones? That’s where Philadelphia-based team at SnipSnap comes in (again). The team’s eponymous coupon clipping mobile app (the one made its debut on the TechCrunch Disrupt stage in New York) has just gotten a big update to streamline the process of clipping and using coupons on your iPhone.

In case you’re unfamiliar with SnipSnap, here’s the gist of it: the mobile app lets users take pictures of their coupons and save them on an iPhone so they’re available while on a shopping sojourn. Just having the picture handy is sort of lame though, so SnipSnap takes those images and saves all the details (barcode, expiration date, cashier code) so the poor cashier isn’t thrown for a loop when you hand them your phone.

While the first you’ll notice about SnipSnap 2.0 is that its received a very mild facelift (think rearranged icons and some different font choices), CEO Ted Mann tells me that the app has been “rebuilt from the ground up” to fix some early performance issues as well as to include some thoughtful new features for the cost-conscious.

But first, the biggest change. SnipSnap 2.0 takes what social elements were present in the original and expands on them greatly — unlike before, new users are asked to create accounts and can link them with Facebook or Twitter to connect with other coupon-conscious friends. From there, those users can also select their interests from a list so SnipSnap can provide them with some starter coupons — apparently, new users of SnipSnap wouldn’t know what do once they installed the app, and the starter coupons were intended to help them a get a feel for using it. Smart. 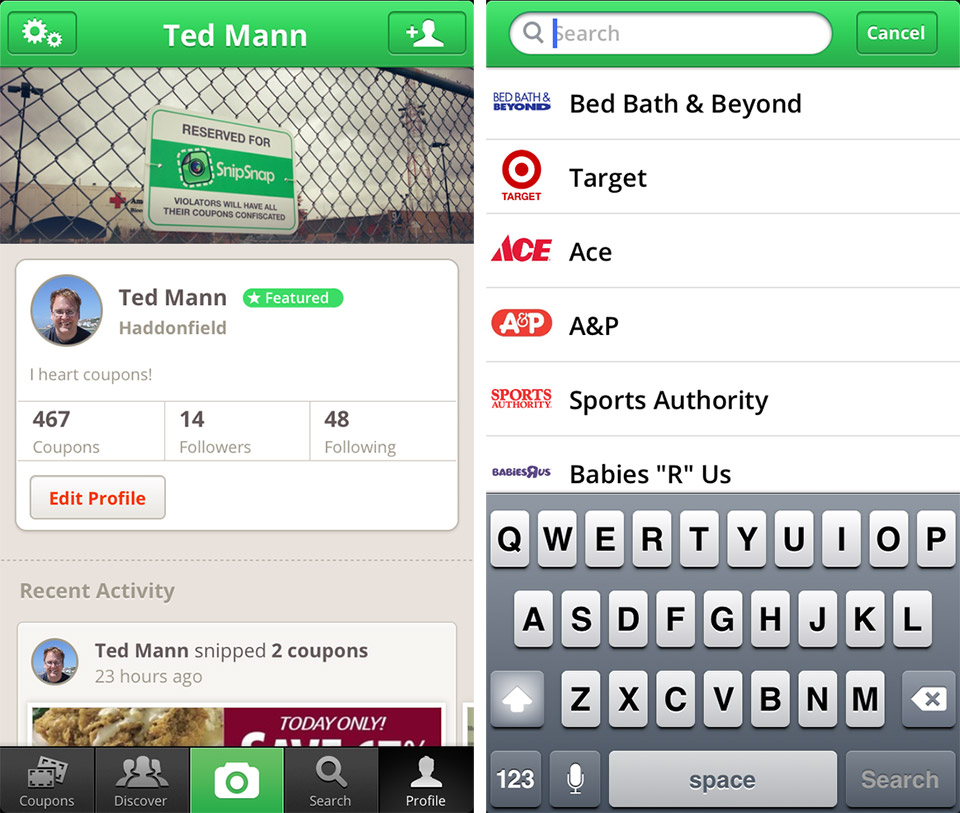 That said, that need for discrete user accounts seem to have had an effect on other parts of the app. Mann describes the team’s original approach to displaying coupons as “a firehose,” with a never-ending stream of images being added to the main stream. It seems like the sort of thing that could be overwhelming for some users — the prospect of sifting through a sea of coupon images isn’t the most appealing either — but that’s where a considerable chunk of users found the deals that they wanted to clip.

For better or worse, Mann and his team were considering killing the firehose altogether. These days, a user’s main coupon stream is now dominated by coupons clipped by social contacts, coupons relating to interests set during the onboarding process, and coupons from featured publishers and partners (think Sears, Advance Auto Parts, and the Cherry Hill Mall for you South Jersey types). Sure, it may seem a bit counterintuitive to drastically alter something that users seem to have taken a shine to, but some changes to how the app’s coupon search feature works helps to take the edge off.

According to Mann, many of the service’s users tend to only look for coupons from a handful of retailers, so he and team decided to add a brief search history to the app. The idea is that users will be able to quickly leap to coupons from the retailers that they’re most interested in, which will help tremendously if/when SnipSnap does remove the firehose down the line.

The rest of the changelog is full of thoughtful, if somewhat less flashy features. SnipSnap now supports the iPhone 5’s larger screen, and users now have the ability to arranged those scanned coupons into bundles for easier access in-store. Also new to this build is the ability to sync coupons across multiple iOS devices. Perhaps the biggest bummer about SnipSnap is that there still isn’t a way for Android users to get in on the cost-cutting action. Though Mann was still coy about a firm release date, he did reveal that an Android app is set to go live within the next few weeks.