Every now and then, I get my hands on an application or a piece of technology that I can’t wait to tell the rest of the world about. Something that is a joy to use, tackles a major problem in a totally intuitive way, and makes otherwise difficult tasks unfathomably easy. Something that has the potential to fundamentally change the way we do things.

Mailbox, which was created by the makers of task-management application Orchestra, is one of those apps.

It’s difficult to overstate how big the email problem is. Many of us struggle to keep up with the hundreds or thousands of emails that we get every day, each of which is asking for some action: respond to, archive, or maybe save for later. But the tools for facilitating those actions have been somewhat broken, as most apps don’t deal with the decision-making it takes to cycle through mass quantities of stuff — some good, some bad, and some impossible to get to in any reasonable amount of time.

Very few really good apps have emerged to tackle this problem. A lot of people loved Sparrow, but I could never get too excited about it. It provided a pretty rich set of tools for moving emails around and making sure they got archived and were searchable — basically improving on things that the iPhone’s native mail app did poorly. But for me, Sparrow was always a little too feature-rich. It didn’t make getting through my email any easier, it just gave me more stuff to do with it. 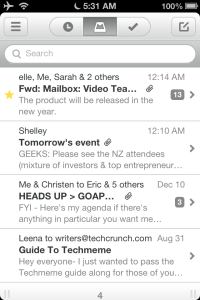 The whole thing is built on the concept of gestures, basically swiping left or swiping right over an email in your inbox to do something with it. Want to archive an email? A short swipe to the right will do that, clearing it from view. Want to delete? Try a longer swipe right.

But the most interesting aspect is the save-for-later option. Don’t have time for an email right now but want to respond at some point? Just swipe to the left. Once you do, you’ll be met with a few options for when you want that email to appear in your inbox: later in the day (three hours later), tomorrow, on the weekend, next week, etc. It then clears those emails from the inbox but makes them easily accessible from the menu screen. It works the same for adding emails to lists, like a “read later” or “watch later” list. It just needs a longer swipe.

Otherwise, email in Mailbox works pretty much the same way as in other apps. You can read emails, reply, reply to all, forward, etc. If there’s one feature that’s missing, especially for advanced Gmail users, it’s probably the ability to label emails into different categories. But for me, the ease of archiving and search within the app makes labels unnecessary. 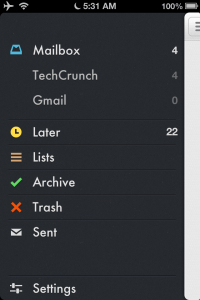 It’s difficult to argue with the results: I frequently strive for Inbox Zero but never quite get there, and I get antsy if there are more than say, 25 emails in my inbox at any one time. But with Mailbox, the only emails that are kept in my inbox are those which are important at the moment. I have a fair — but not overwhelming — number of emails that will return to me and be dealt with later, and the rest I’ve been able to archive or delete. (I’ve yet to take advantage of the Lists feature, which seems more for reminding oneself to read an article or watch a video at some unspecified future time.)

The app is currently in beta testing, with plans to release sometime in the New Year. Wanna see more? Watch this video:

Or check out these rave reviews from beta users:

Massive fan of apps that completely replace defaults in iOS. Recently: @mailbox for Mail and Fantastical for Calendar

Very surprised at how much I’ve taken to dealing w/ email the @mailbox way. I’m already yearning for an iPad & Mac version :P

After using @mailbox for 1 day, it is now on my home screen. 1 inbox for mail and tasks is an interesting concept. Very swipe-able too.