When you take your seat at the 2012 Crunchies Awards next month, (tickets on sale now!) look above the stage. You will see an acoustical canopy system made of 59 Plexiglas reflector panels controlled by cutting-edge technology — for 1991. As the Crunchies celebrate the latest technology advances and startups onstage, over the heads of the winners will be an impressive feat of technology from more than 20 years ago.

When it was installed at Davies Symphony Hall in San Francisco, it was bleeding-edge technology, yet it’s still in daily use today. The system runs off a long discontinued Apple Power Mac G4 with custom HyperCard software and AppleTalk networking, and it independently controls the height, roll, and tilt for each panel. The panels can travel 70 feet up and down with a 0.1-inch accuracy, with a triple-redundant system of microprocessors for safety.

The Power Mac G4 running the system sits on the desk of Jim Jacobs, the stage electrician at Davies who was part of the original team that installed the system. When Jim needs to move the panels, he makes changes on the Mac and can see the panels on several TV monitors move at 16 feet a minute. Only 16 panels can move at a time. Stopping all 59 panels at once could cause the building to shake with 50,000 pounds of down force. 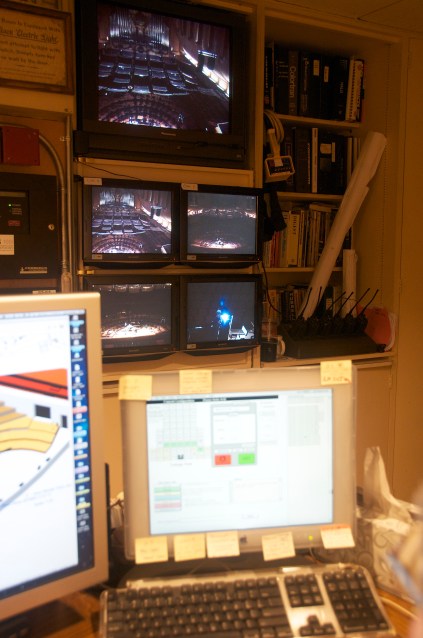 The G4 is actually the third generation of the system. Jim says it first ran on an LC II running Mac OS 6. It then moved to a Centris 610 with Mac OS 7. Now it’s running on the G4 with Mac OS 9.1. Jim has a spare G4 just in case.

The software runs as a custom HyperCard program, with thousands of lines of code. Ted Chavalas, who oversaw the software and designed the circuitry at the now-defunct Radiant Enterprises, says HyperCard was fast enough to handle the job. The program hasn’t been updated since 1998. Color status and exact positioning information is provided for each panel. While panels can be controlled individually, entire canopy configurations can be stored and run at the touch of the “Go” button. The Crunchies will likely use the “PA Lighting” preset. 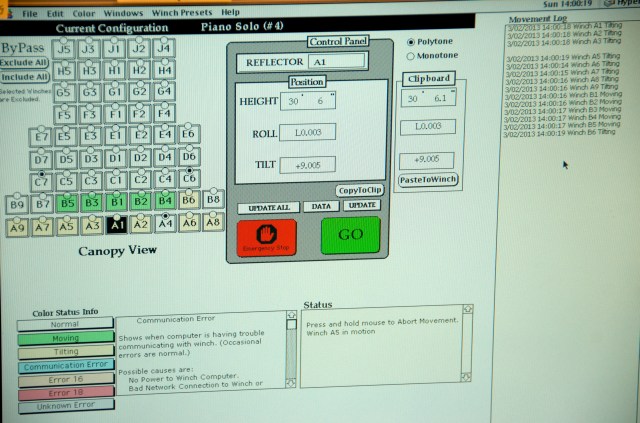 The settings in HyperCard are communicated from the G4 to the custom control circuits in 59 winches above the stage via AppleTalk. Chavalas says there just weren’t too many cost effective ways to network computers back then. AppleTalk was a popular protocol used by Apple in the 80s and 90s before the cost of the cost of the cost of Ethernet technology became affordable.

When Apple changed from OS 9.2 to OS-X, driver support for HyperCard communication over AppleTalk became extinct. So the system is frozen in time and can’t simply use a newer computer.

Jacobs gave me a tour above the stage where the winches sit (two are seen in the photo below), each with its own motors, relays and three PIC16C57 processors. 4 cables run through holes in the ceiling down to each panel. In addition to controlling the location of the panels, the circuit provides feedback to the Mac G4 on the actual positioning. 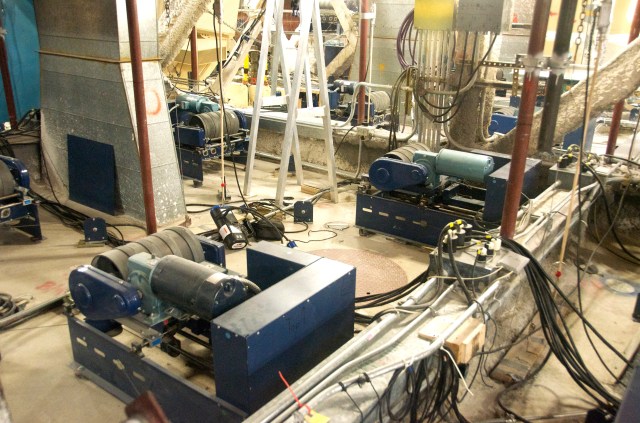 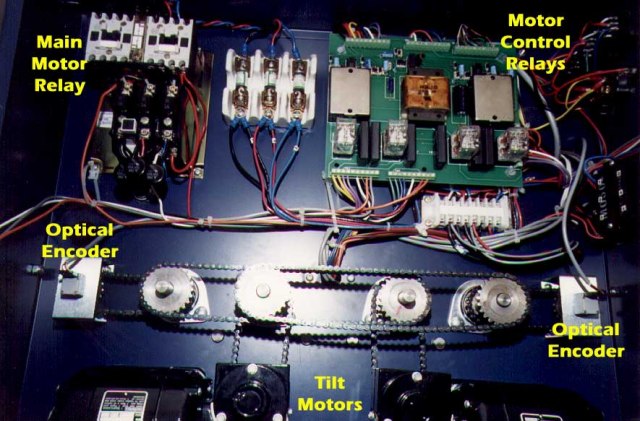 The canopy was built for three main reasons, but surprisingly the primary one wasn’t for the audience. The first priority was to help the musicians onstage communicate and hear each other as the panels reflect the sound back to the stage. By tilting the panels into custom configurations based on the orchestra design, the musicians can hear one another and stay in sync. Of course, this also helps the audience hear a better performance.

The other two priorities include making the sound better for the audience who might be sitting in acoustically dead spots near the stage, as well as providing an interesting visual aesthetic.

You might be wondering why Davies hasn’t upgraded the system. Well, it still works just fine. Why mess with something that works? Also, there are enough spare parts around to keep it running for a long time. The original system was built for around half a million dollars. Estimates to update just the electronics have topped $3 million.

For more information about the canopy system, visit this page put together by Ted Chavalas.

The 6th Annual Crunchies Awards, the Oscars of tech as some people have coined it, are coming up fast. Nominations for the best in technology have now been closed and the finalists are being tallied. It’s one night you will not want to miss. Tickets for this year’s Crunchies Awards, held January 31st, are on sale now. Be sure to grab yours while you can.

And as always, if you’d like to sponsor the Crunchies, reach out to our amazing sponsorship team here.