The New York Times this afternoon relaunched its Android application with an improved, more responsive design. It also added support for text-to-speech functionality, allowing readers to listen to the Times’ articles and blogs using Google’s built-in voice engine or another of their choice.

Originally, the Times had experimented with a limited tablet application geared toward 7-inch devices, which, according to Alex Hardiman, the Director of Mobile Products at the Times, helped the news outfit gain “helpful learnings,” toward this latest update. 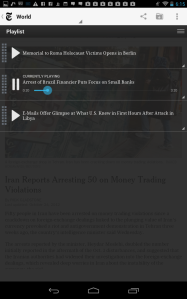 “Today, after the success of Google’s ICS [Ice Cream Sandwich] design guidelines, and with the proliferation of high-quality Android tablets, we decided to invest in a truly responsive Android application that is visually optimized for all device screen sizes,” she says of the changes.

The new release, version 3.0 as it’s called, is less about introducing new features and more about this new, adaptive interface that now works on a range of tablets. Hardiman also tells us that The Times had been experimenting with a few of today’s “new” features like the text-to-speech functionality and voice-enabled commenting option over the past few months, and, after adding some polish to those items, have included those items in today’s update.

In terms of the visual style of the application, the native design elements introduced in the September app redesign are still present. This includes the main action bar and article multi-select feature (used for sharing or building customized article “playlists”). The most noticeable visual change for users will actually be the new dynamic interface. On the phone, articles are laid out in one column and images are restricted to small and medium-sized crops, while on tablet devices, the layouts have multiple columns, larger images and scaled typography. 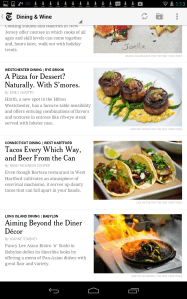 Subscription pricing remains unchanged: a subscription to NYTimes.com + smartphone apps is $15; with tablet apps it’s $20; and all-digital access is $35; home subscribers have unlimited access to all the above. The Times says it doesn’t break out its digital subscriber numbers by device, but as of Q3 2012, it had 566,000 paid subscribers to its various digital subscription packages, e-readers, and replica editions of The New York Times and its global edition, The International Herald Tribune.

News of the Android relaunch follows the release of an HTML5-optimized version of The Times in October – a move clearly meant to route around Apple’s Newsstand (and Apple’s cut).

Catering To The Digital Crowd

Optimizing for the tablet isn’t just a good move to enhance the user experience, however. A Pew Research study recently found that tablet owners tend to read for longer periods, and delve into more in-depth articles. Tablet owners spend an average of 51 minutes on news, the report said, while smartphone owners spend 54 minutes. But those who own both devices read for 64 minutes on the tablet, and 54 minutes on their smartphones. Sixty-nine percent of tablet owners also read a full article when browsing through headlines, the report found. These are precisely the kinds of users The Times, and all news media organizations for that matter, needs to cater to.

Another Pew study, released today, also speaks to the growing number of young readers who consume news digitally. The numbers revealed are both good and bad for paywalled news organizations like The NYT. Young adults rival or surpass older generations as news consumers, Pew says. Thirty-seven percent of smartphone owners ages 18 to 29 get news on their devices daily, while 40 percent of those 30 to 49 do. In the higher age brackets, 31 percent of those 50 to 64 read on mobile and 25 percent of the 60+ crowd do, as well.

Younger readers are also more likely to share news they read on mobile or tablet and engage with ads. Those ages 18 to 29 were twice as likely to “at least sometimes” touch an ad on a tablet than those ages 30 to 49.

Good so far, but…

Pew also found that paying users tended to be the older crowd. Those over 50 were more likely to have a print/digital combo: 20 percent did, while only 12 percent of those under 50 also do. And only 9 percent of the under 50 group said they had digital-only subscriptions.