GoDaddy, the web-domain registration and hosting company with some 11 million users and some 50 million+ domain registrations under its management, is today announcing a new CEO, Blake Irving. Irving’s most recent, high-profile role prior to this had been as chief product officer at Yahoo, but he left in April 2012 — before the reign of Marissa Mayer and around the time that about 2,000 product people were laid off from the company, largely from his division. He will formally take up the role of CEO at GoDaddy on January 7, 2013.

Before GoDaddy, Irving had been at Microsoft, where he held a number of roles over the course of 15 years, including corporate VP of Windows Live, the company’s online services portfolio that includes Hotmail and MSN Messenger. 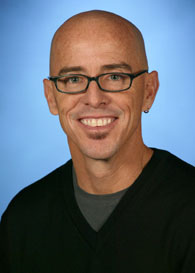 CEO for some time. Prior to Irving’s appointment, Scott Wagner, of GoDaddy shareholder/part owner KKR, has been serving as interim CEO since July 2012. KKR, along with an investor group that included Silver Lake Partners and Technology Crossover Ventures, became the owners of GoDaddy in 2011 for $2.25 billion.

GoDaddy, once slated to go public as far back as 2006, has had its ups and downs as a company: from being one of the biggest players in domain registration and management services, to controversial stories about its founder (and remaining executive chairman Bob Parsons), to major site outages.

More recently, it has been a  is slowly reinventing itself to focus more on enhanced services, and products, which  it can offer to its customers — mainly small and medium enterprises — on top of basic domain registration and hosting services, as a way of creating new revenue streams. This is where Irving’s experience both at Yahoo and Microsoft (where he would have developed some nous about small and medium business customers as well) will come in handy.

The shift to products and services has taken GoDaddy in some different directions. One of them has been into the area of mobile, helping companies optimize their sites for wireless devices, and run mobile commerce operations through those sites.

That strategy shift has also seen GoDaddy make its first acquisition earlier this year, of financial services company Outright. And we have heard there will be more acquisitions on the cards in the future.

“Go Daddy, the industry leader of Web hosting solutions for small and medium businesses, is poised for a promising future,” said Go Daddy Executive Chairman and Founder Bob Parsons. “Blake Irving’s deep technology experience and his history of developing new cutting-edge products and leading large global teams make him an enormously compelling choice to drive Go Daddy to the next level of its domestic and global growth.  Go Daddy has made great strides with Scott Wagner as CEO, and we look forward to building on that in the future.”

Go Daddy has recently been expanding its market-leading products to support its nearly 11 million customers, mostly small business customers both domestically and internationally.  This summer, Go Daddy acquired Outright.com, a cloud-based financial management application and the company also formed a partnership with DudaMobile to launch mobile Website Builder, a service that automates the integration of Web and mobile sites to save businesses time and expand their customer reach.

“I’m honored for the opportunity to lead such a talented team and to be a part of such an innovative company,” Blake Irving said. “Go Daddy is and will continue to be the hub where businesses can come to life, grow and prosper. We strive to be the global resource that fuels success for countless entrepreneurs and innovators around the world. As a long time Go Daddy customer, I have seen firsthand an organization that is committed to its customers 24 hours a day and seven days a week and yet there still remains much more we can do to enhance the customer experience. This is a fantastic opportunity, and I can’t wait to hit the ground running in January.”

“Go Daddy is fortunate to have Blake Irving join the team for the next chapter in his long time career as an innovator,” said Scott Wagner, Go Daddy’s Interim CEO. “I’m thrilled for Blake and I am thrilled for Go Daddy. We have good momentum on product and our international growth and having someone with Blake’s talent and character lead the company will only accelerate it.”

Blake Irving has been appointed Chief Executive Officer of Go Daddy, effective January 7, 2013, and will also join the Go Daddy Board of Directors.

Irving most recently served as Chief Product Officer at Yahoo! Incorporated, where he developed and rolled out the unified product vision and strategy – growing the company to nearly one billion active PC and mobile users.  Prior to Yahoo, he spent 15 years at Microsoft, serving in various senior roles, most recently as Corporate Vice President of the Windows Live Platform.  While at Microsoft, Irving was responsible for creating and leading a global development and operations organization of more than 4,000 employees in the creation and operation of Microsoft’s global online services, launching several new products, including MSN Messenger and growing Hotmail from 7 million to 290 million users.