Julian Miller taught high school for four years, and like many teachers, he cared about his students’ learning outcomes — about getting them across the finish line. Unfortunately, current educational software and systems don’t make that easy. Teachers that want to follow student progress and understand which tools or methods are working and why are routinely forced to log into six to eight different software products to get any sort of 360-degree view of students and classes, he says.

Frustrated, Miller left teaching. But the problem stayed with him, so he began asking other teachers about their edtech experiences. He quickly learned that he wasn’t alone: Many teachers and administrators believe that the fragmentation of educational platforms and opacity of student data is crippling the system. In fact, 46 percent of teachers quit before reaching their fifth year and the cost of that attrition is approximately $7 billion per year.

So, Miller, who also happens to be a front-end developer, began building Ontract — “the tool that would have kept me in the classroom,” he says. This week, Miller and co-founder Matt Duch officially beta-launched Ontract, a realt-time analytics platform for K-12 schools that aims to do for educational data what Mint.com did for financial data.

Ontract’s reporting is designed to give teachers and administrators quick visibility into a range of information from individual students all the way to a federal level. Teachers can access standard reports generated by Ontract, create their own based on particular data subsets, view charts, graphs and infographics and tap into the startup’s predictive technology which aims to help them get a sense of what all this data means. 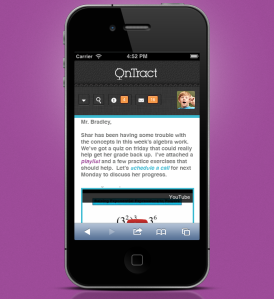 As to how it works: After schools register to use Ontract, the company connects the school’s core learning systems to its platforms and teachers can then connect their personal tools. The startup applies its analytics to identify trends, patterns or outliers, and notifies teachers when there’s a problem or aberration.

The startup’s personalized learning engine generates a playlist of resources to help, which teachers can then push to parents in the same way they’d respond to an email. And parents, in turn, have instant access to those resources to help their children in real-time, rather than having to wait for teachers to find time to walk them through it.

This has a big value prop for both sides of the equation. But, again, for teachers, the biggest appeal of Ontract really lies in the fact that it aggregates disparate data silos under one interface so that they can input information as they normally would, using Ontract to navigate that data. This could potentially remove some of the friction (or fear) students and IT staffs face when they want to change software vendors.

Under the current structure, it’s too much of a hassle (and too costly) to be worth it. Giving schools one platform-agnostic, modular solution could be a benefit not only to teachers, but for startups and businesses building modern educational software — businesses that often find it nearly impossible to sell K-12 schools and districts.

It’s the catch 22 of education: Administrators and educators are dying for tools that empower them and provide insight and visibility into learning patterns and outcomes that can help them improve retention and teach more effectively, but they’re not being built (or funded) because of this pre-conceived notion about the arduous and lengthy sales cycles in K-12 education.

Meanwhile, Miller says, his team went into a meeting last week where there were four teachers using Excel in an attempt to extract a single data point — they’d been at it for four hours. That’s not a joke, this happens and happens every day. After showing them Ontract, one of them called the startup “Data Jesus,” which is hilarious — and apparently illustrative of the need for salvation from crappy infrastructure.

The last thing that education needs is more “comfortable” or “sexy” data silos with decent UX/UI, Miller says, and while there are a lot of edtech platforms out there attempting to aggregate data, the founder believes the advanced analytics, collaboration element and personalized learning engine is what could give them a leg up. 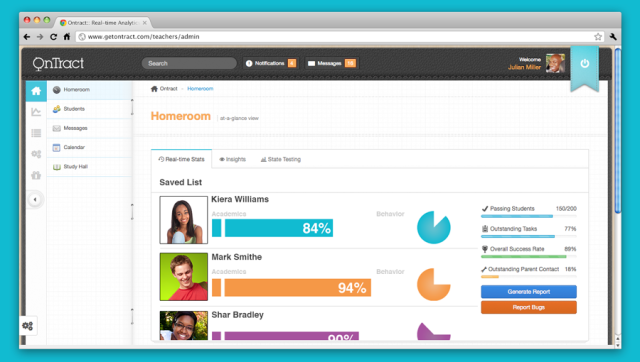 Be that as it may, the competition is rising, as educational giants like Pearson move into the space alongside startups like AlwaysPrepped.

Nonetheless, Ontract is starting to find some traction, as 90 percent of its sales are resulting in full adoption, Miller says. It also has two licensing agreements lined up that go into effect in January, one with The Strive Partnership that will bring the startup’s solution to 40,000 students in the Cincinnati Public School District (the startup is based in Chicago) and the second is with KnowledgeWorks and its subsidiaries, one of which is the New Tech Network, which reaches over 100 public schools. As a result of these partnerships, by the second semester of this school year, Ontract expects to be processing data for more than 100K students.

As to cost (and monetization)? Ontract uses a tiered pricing model, offering the basics for free and advanced access in two additional tiers, which cost $1 and $9 per student, per year.

In the end, it’s all about usability, and teachers, administrators and schools will be (and should be) the judge of its efficacy in that regard. But by working to create a 360-degree solution that accommodates student information and learning managent systems, which also incorporates external app data (like Khan Academy) and by entering the market with partnerships in place, Ontract is off to a great start. And, edtech entrepreneurs take note: Schools want to work with teacher-founders, and startups that can show real familiarity with educational problems from the perspective of the teacher give themselves a better shot at being part of the 25 percent.