Aereo, the polarizing startup that allows users to watch broadcast TV over the Web, is currently fighting for its life in court. The IAC and Barry Diller-backed startup is tangled up in what will likely be an arduous and lengthy battle with the major broadcast networks over the legality of its service — long treatise on the subject here — but that doesn’t mean Aereo has any intention of putting a hold on business development.

In July, the New York courts denied a preliminary injunction against Aereo that would have shut the service down before it got off its feet. Since then, it’s been hard at work expanding its footprint and ramping up customer acquisition, offering free trials, special deals, low-cost options and support that now extends beyond Apple products to all major web browsers.

In spite of the fact that broadcasters are doing everything they can to shut it down, the startup is looking to accelerate its expansion onto other platforms, beginning with smart TVs. Aereo CEO Chet Kanojia said yesterday (via Zatz Not Funny) that the company will soon begin releasing apps for a number of connected TV devices and streaming-media boxes like Roku.

Speaking to the audience at the VideoSchmooze Conference in New York, the CEO said that, while Aereo’s service already includes a private channel dedicated to Roku, it plans to bring a “more complete experience” to the device “in the near future,” according to Zatz.

It also hasn’t been lost on Aereo that game consoles with connected digital media services, like Xbox 360 and Xbox LIVE, have recently been beefing up their entertainment content. ESPN, Rhapsody, Blip.TV, Lovefilm and IGN are just a few of the media providers to launch apps on Xbox over the last month.

The CEO noted that these consoles represent a big distribution opportunity for Aereo and “make a lot of sense,” even if, at present, that’s a somewhat more distant reality.

After all, due to its ongoing legal battles, Aereo’s service is still only operational in New York City at this point. Plus, the networks appealed the denial of its initial injunction, and courts will soon be presenting a decision on whether or not it will be upholding that decision. The networks have (admittedly, a smart move) recently moved from focusing on violations of copyright laws due to the startup’s DVR-like functionality to its avoidance of retransmission fees.

The networks want Aereo to be treated like a cable company, which is at once understandable (from their perspective), yet on the other, patently absurd. As Jordan pointed out, the court seems to have begun to take a more skeptical outlook on Aereo, with the presiding judge at one point comparing the startup to a company “that avoids taxes.” 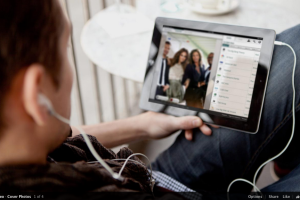 The networks want to shut the service down (for those unfamiliar) for the way in which it essentially uses arrays of tiny antennas to capture broadcasts over the public airwaves, delivering the signal to users’ connected devices via IP. The startup does indeed avoid retransmission fees and it’s able to take advantage of the diminishing costs of transcoding video streams, monetizing by offering a freemium subscription service.

The more the startup is able to spread onto other platforms, the more it has to lose if the networks are successful in overturning the injunction. However, as Zatz cleverly points out, the startup is also building and implementing both technology and a distribution network that may have other uses should its current business plan be smacked down in court.

Either way, I will editorialize a bit to say that the case is fascinating and both the dialogue around the case and the final verdict (whether Aereo wins or not) will have significant implications for an industry that is very much in flux — if not in jeopardy.