More news from YouTube! While on the creator side of things, the company is working on finding the next crop of collaborative geniuses, the product team has been busy building a new homepage experience. That experience is being rolled out as we speak, so users should begin to see it later today.

The new version of the homepage is centered around the YouTube Guide, which shows all new videos from channels that users have subscribed to. It also recommends channels that you might like, based upon your viewing habits, as well as those that your friends are watching. The new Guide feature doesn’t just live on the web in the browser but will also be the focal point for viewers on a wide range of mobile devices and connected TV platforms, including Android, iOS, Playstation 3, and Google TV. 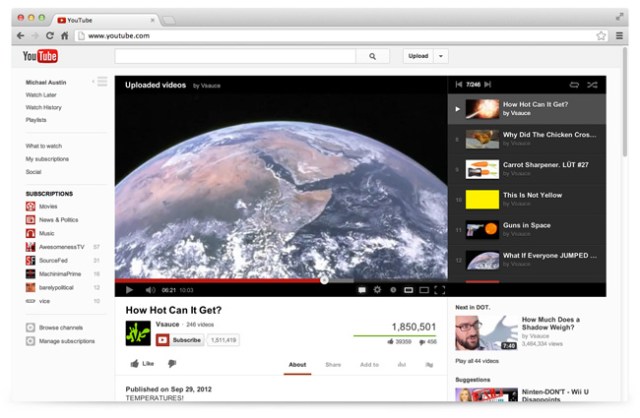 One of the big complaints about the old YouTube design was just that there was too much going on, which distracted from the thing that most people came to YouTube to do — watch videos. The new site changes that by putting the actual content front and center when you go to a video page. All the other features — the subscribe button, the social sharing features, related metadata and all the rest — have been moved down below the video.

Video playlists — which allow for more concurrent, uninterrupted video — are moved to the right side of the video, which will hopefully keep more people watching for longer periods of time. While much of the YouTube traffic has been driven by search in the past, it is making a concerted effort to get viewers to stop snacking and get feasting on multiple related videos.

YouTube’s new design comes about a year after its latest refresh, which was designed to help users start subscribing to more video channels. While channels have existed since 2005, the company has been trying to increase video views from channels over the last year, especially as it’s investing in more Original Channels.

That plan has apparently worked, as the number of users who subscribe has more than doubled during that time. YouTube users are subscribing to about 50 percent more channels, and view time from channels has grown 30 percent. YouTube now claims to have more than 800 million users showing up every month who watch 4 billion hours of videos during that time.