We just got screwed. More on this below.

Nobody says “Web 2.0” anymore. The term just didn’t stand the test of time, long ago it became clichéd.

But a handful of years ago it had real meaning to a lot of us. It encompassed a lot of ideas, but chief among them was the notion of mashed up web services, all collaborating via APIs.

Whether a service had robust APIs to allow it to collide in unexpected ways with other services was very important. Services that left out APIs, for whatever reason, were flawed.

And, importantly, services at least paid lip service to the idea that data was “ours,” not “theirs,” and would be treated accordingly.

So that was a really nice fantasy that lasted for a long while. But what happens in the real world is companies grow up, hire grown ups and they sit in board meetings and they fret about barriers to entry in their respective markets.

And they forget about users. 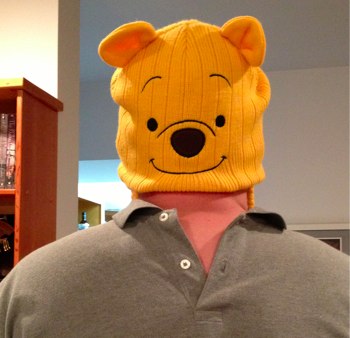 Case in point, this piece of art that I created, called Poohead, will no longer display properly on Twitter. I have to live with a flawed reproduction of the original artwork, cropped incompetently and the magic is just lost.

Screw that, thought Twitter. We used to love Instagram, particularly during the time while we were trying to buy Instagram. But then we didn’t buy them and so, obviously, we now hate Instagram. We’re gonna screw them and bad.

So that’s all clear now.

But there are lots of civilian casualties in all this screwing. Those civilians being us users, the dopes that keep feeding these companies content in the vain hope that this time we won’t get screwed.

Because these companies we love do treat our data as sacred, right? They don’t sit around the office calling our data their data and occasionally slip up in public, too, right? Except,

“This is an evolution of just where we are and where we want links from our content to go.”

That was Instagram founder Kevin Systrom earlier today at the Le Web conference talking to my CrunchFund partner MG Siegler (disclosure, MG is my partner at CrunchFund).

Yep, Instagram is now officially in the “it’s our data” club. Pretty much everyone joins that club as soon as they can. One day they love users and talk about how much they owe their users. The next day it’s “users who? This is our data.”

And of course it goes without saying that the best way to run a business is to treat users with respect and make sure that your product does everything it can to delight and amaze. Except,

“This [screwing users, because Twitter screwed them before right after they screwed Twitter] is a consequence of us doing the best thing for our business at this time.”

Systrom again. Taking care of business by doing the opposite of delighting and amazing them.

Someday one of these companies is going to grow up from a fledgling, user-loving baby startup and get lots of traction and then…and then…wait…think hard…No! We will not screw over the users. Even though we totally have the moral high ground here because somebody else screwed somebody before and now it’s all just a blood feud that nobody can figure out who started and QUICK grab all that money over there before those other guys do.

See that? They thought about doing the right thing, which may have even gathered so much long-term user loyalty that they could be sitting on a hundred year brand. And in the middle of thinking all those noble thoughts about doing right by users they just slapped themselves back down to earth and did what they always do.

Seize all assets within reach, and tell the sheeple users that they were sadly forced to do this to protect the data, which is their data now, and PS thank you very much for transferring all that data you made to us. High five! Then go home and pour yourself a double Macallan, neat, and tell yourself again how much you are helping the world become a better place.

Disclosure – I just broke a rule where I said I wouldn’t be talking much here on TechCrunch about companies we’ve invested in at CrunchFund. In this post I have a financial interest in every single company mentioned, who are all acting like children all hopped up on sugar and playing with too many LEGOs.

LEGOs made of solid gold, lovingly crafted by us. The screwed sheeples. We sheeples get no LEGOs. None at all.