Startup founders are apparently still holding out hope for the social recommendations space, and today, yet another app has launched with its own take on mobile opinion sharing. After three months in private beta, Knotch has officially opened its doors to the public.

The app competes somewhat with others we’ve seen debut (Tout’d, now Villij, Livestar, Tipflare), die (Oink) and exit (Stamped). The last one in that list – Stamped – which was recently acquired by Yahoo for “double-digit” millions, being the key “success” story here.

Many of these apps try to take on local recommendations à la Yelp, claiming that Yelp is over-crowded with low-quality reviews, and users are more likely to be interested in friends’ recommendations instead. Knotch, however, is a bit different. It’s not immediately targeting the local space, but is rather providing a platform for opining on anything. Its clever trick is letting users drag a temperature-based slider from “hot” colors (red, orange, etc.) to “cold” colors (greens and blues) to indicate their level of excitement for topics ranging from Ashton Kutcher to World of Warcraft. 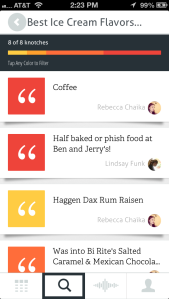 With a Twitter-like following model in play on the social side, Knotch allows you to see what your friends are sharing, as well as the topics trending across the network itself. You can also search for other topics within a separate section in the app and see which have recently hit your Knotch timeline.

The company was founded by a self-described “nerdy computer science-y kid,” Anda Gansca, who studied data analysis at Stanford, and her co-founder “soulmate” Steph Volftsun, who shares her passion for data mining. That data obsession comes through clearly in the app, but so does a bit of the nerdiness, I’d say.

We asked Gansca what the draw is for Knotch in an age when there are almost too many platforms for sharing an opinion. In addition to the direct competitors listed above, most people feel comfortable simply using networks like Facebook or Twitter to post their random thoughts.

“The idea initially for me came as an opinionated writer,” she explains. “I felt really frustrated with the fact that I couldn’t express my opinions in a meaningful way. There was no way to add my two cents to how the world felt about a topic and make a statement. And there was no way for me to really gauge how the world felt about I topic I was interested in,” she says.

The statement almost blithely ignores the existence of Twitter, of course. But in Gansca’s defense, despite the more recent personalization of Twitter’s “trends” section and advancements on the search side, there’s no real sentiment analysis performed on the platform itself. Third-party clients handle all such things. Yes, people may be talking about some new movie or book or news event on Twitter, but it’s unclear, at a glance, how they feel about it. That’s where Knotch comes in.

Gansca argues that we’re all very judgmental creatures and we want to share our thoughts with others. Of the 300 beta testers, she claims users are logging in 20 times per day and spending a few minutes in the app each time. It seems like with metrics that high, they haven’t been adjusted to remove the outliers – the heavily engaged co-founders and two other full-time employees are surely bumping the numbers up. (For comparison’s sake, Path users reportedly engage a few times per day).

In any event, even if early adopters are keen to share their opinions on this new platform, what about the mainstream? What’s the use case for everyone else? The percentages may be changing, but the majority of users are still content consumers, not creators, Gansca explained, adding that, as the network grows, it could become a way to see the sentiment associated with any topic, and that would be the draw.

Knotch previously participated in Stanford’s StartX accelerator, and has less than $500,000 in angel funding. The app is live in iTunes now.