It appears that BlueStacks isn’t just a flash in the pan. The Silicon Valley-based startup, which makes software that allows users to run their Android apps on Macs and PCs, said today that it has passed 5 million organic installs through its homepage. Vanity stats like this are annoying, yes, but what’s notable is that BlueStacks hit this milestone in under eight months. And the news comes on top of its recent partnerships with AMD and Asus, which have announced their intention to pre-load BlueStacks’ technology on over 100 million units.

In September, BlueStacks announced a partnership with chipmaker AMD, which brought its app catalog to AMD-powered Windows 7 and Windows 8 machines through the launch of its new app store, AppZone. As Sarah pointed out at the time, much like AppUp, Intel’s app store for PCs that “has been optimized to run on Intel-powered Ultrabooks,” with AppZone, the chipmaker optimized BlueStacks’ technology for AMD GPUs and APUs.

Of course, it was only a matter of time before the chipmakers began implementing the startup’s technology, as AMD was the lead strategic investor in BlueStacks’ $6.4 million series B raise in October of last year. The round brought the company’s total investment to $15 million and saw AMD join investors like Andreessen Horowitz, Ignition Ventures, Citrix and Qualcomm.

It’s unusual for software makers and manufacturers like Citrix, Qualcomm and AMD to show up on the same roster of investors, yet, as Sarah said, it was a demonstration of an eagerness among investors to leverage the Windows ecosystem as a platform to run Android apps.

The partnerships with AMD and Asus and its backing from Qualcomm also set the stage for BlueStacks to team up with additional manufacturers to pre-install its technology on PCs. The big-picture goal for the startup is to help bring the some 750K Android apps to each and every one of the billion-plus PC users out there. It’s a sizable opportunity, another part of the reason investors (and chipmakers) are eager to test the waters.

BlueStacks’ technology allows users to run graphics-intensive Android apps on desktop PCs via its patent-pending “Layercake” technology, which initially enabled Android apps to be compatible with x86-based PCs, followed by Macs, and now includes those developed for ARM processors — Angry Birds Space and Fruit Ninja being two familiar examples. (More on this below.)

The company has been looking to build a developer platform, as well, and has been partnering with the makers of apps like Fruit Ninja, SliceIt!, Townsmen, Evernote, StumbleUpon and Barnes & Noble (Nook). The main selling point being that developers don’t have to modify or port their apps to run them on PCs, which means less heavy lifting for those who have already developed apps for Android. 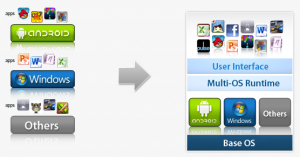 To this point, HandyGames CEO Christopher Kassulke let it slip last night at Mobile Gaming Europe that HandyGames will be launching their uber popular Clouds and Sheep as a PC game using BlueStacks. And the more big app development houses begin signing on, the more BlueStacks thinks that it’s helping to create a crack in the wall between mobile and PC gaming.

But here’s what could be most exciting for developers (and users) looking at developing for (or buying) Windows mobile devices. The newly released Windows RT, for those unfamiliar, is a special version of Windows 8 built for mobile (specifically ARM) devices — so, really, tablets. If somehow you haven’t noticed, Microsoft has been pushing its new Surface tablets pretty aggressively since their initial release in late October, partly manifesting through that snappy, percussive ad campaign you’ve probably seen by now on the tube. The main mobile OS being offered by the Surface? Windows RT.

As of now, consumers can buy a number of ARM-powered Windows RT devices, and there are more coming. But Surface currently has the highest profile among these tablets and devices, yet, the problem is that they’re not selling as well as Microsoft would have hoped. According to Tech Report, MSFT’s initial order of 4 million Surface devices has been cut in half thanks to slow sales.

Leaving the device itself out of it, probably the biggest reason for this boils down to apps. Compared to iOS and Android, few developers have built native apps for Windows 8. Even if consumers want to buy the Surface, many would rather opt for an Android or iOS device, because they offer far more access to the apps we’ve all grown accustomed to using on a daily basis.

So, naturally, rumors have begun to mount that BlueStacks’ next project will be to make its tech available to Windows RT users. As evidenced in this forum, hilariously, it appears that Microsoft salespeople have even begun to suggest using BlueStacks if users want to buy a Windows device and get access to Android apps.

The Droid Guy was one of the first to pick up on the BlueStacks, Windows RT rumors, as a BlueStacks team member recently divulged in a separate forum that the company was in the process of bringing those 750K+ Android apps to Windows RT. BlueStacks Engineer Deepak Sharma, via The Droid Guy: “We are considering offering BlueStacks for Windows RT next year.”

BlueStacks team members approached by TechCrunch would not confirm that this is in fact happening, but from what we’ve been able to gather from other sources, it seems there’s a good chance this could happen in early 2013.

However, as The Droid Guy points out, Microsoft’s Windows Defender could pose problems in this regard, as it could force BlueStacks to release its own app on the Windows Store, which, knowing Microsoft, would likely be disapproved. Until then, BlueStacks works well with Windows 8 Pro-based tablets and devices, but if BlueStacks is able to produce an ARM version of its technology, this could be a big boost both for the startup and for those looking for access to a viable app platform on their new Windows device.

With support for both ARM and Windows 8 Pro, developers could significantly increase their distribution without having to develop native apps for Windows devices — great for them but, again, not something that Microsoft is likely to get too jazzed about. 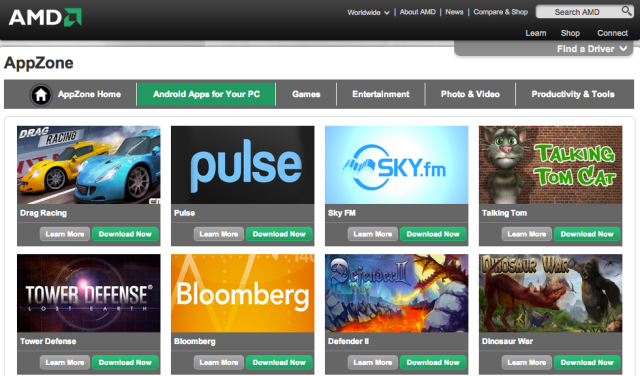