Hot-or-not is a site that most of us who have used the web are familiar with. Sit down at your desk, look at pictures and profiles of a bunch of people, and respond to them with an easy voting interaction. That type of service has been popular over the years, but with the surge of mobile coming fast and furious the past few years, there are opportunities to take it to the next level.

Today, I spoke with one of the co-founders of a company called Input factory, Inc., that’s behind a new social voting app for iOS called Polar. That co-founder, Luke Wroblewski, is a self-described “data nerd” and obvious design fanatic. When it comes to surveys and polls, it’s all about the numbers, but for the users, Polar is all about entertainment, he says. And collecting data that his team can use to make great connections for its users. He’d know a thing or two about this, as a former VP at Yahoo VP and the co-founder of BagCheck, which was acquired by Twitter.

The idea behind Polar came when Wroblewski had noticed that his friends were looking for things to do during their “downtime”, a time when people who love to use the web would check tweets or Facebook. That’s time that could be filled with interesting and fun social interactions, so him and his partner Jeff Cole built Polar.

Taking fast action is fun, that’s why a lot of people use Facebook’s Poke feature. It isn’t necessarily doing anything other than letting your friend know that you’re thinking about them. That’s still a datapoint for Facebook, you can count on it. Basically, you can ask people for their opinions on anything, and get responses quickly. One of the features that I like is that you can add images from a variety of sources that Polar handles on their end. Just search for a word and you’ll find a picture. No hunting around. 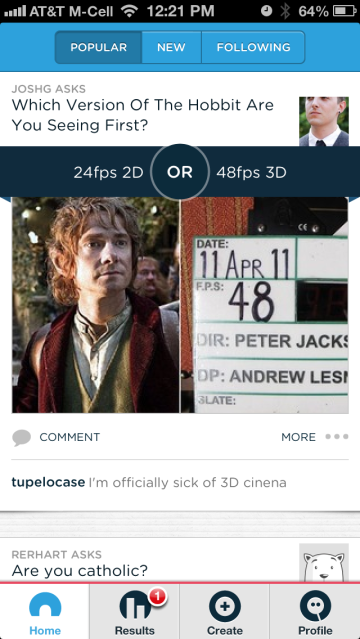 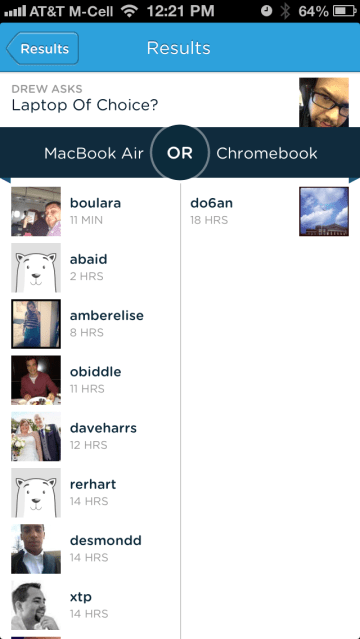 For Polar, Wroblewski wanted to make everything insanely fast:

We knew we were making it fast and easy, in the past eleven days we’ve had a half a million votes. The average engaged daily user is voting 60-70 times per day. It only takes 30 seconds to vote on 10 things, we made it that way. The things that we’ve already learned from that data have been put into action, we’ve built a recommended follower algorithm based on people who vote like you. I don’t own a sports network or TV station or comic book shop, but I can tell you what the top TV shows and which brands are interesting to people from using Polar. We see the Zeitgeist.

How obsessed was the team with making Polar fast? They fine-tuned the app until it hit the benchmark goals that they set. Watch this video:

Not only is the app fast, but the ability to get people to vote for things is quick too. Sharing to Twitter, Facebook, Email or SMS is a few taps away, with a handy web-based landing page for non-app users. 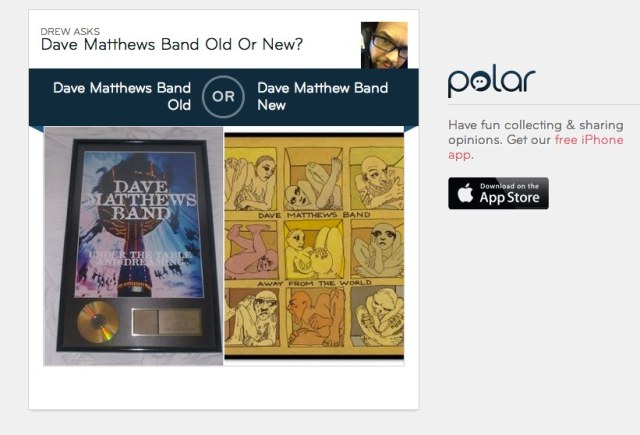 In addition to data, Wroblewski sees the power of creating a platform that people can use however they like:

The great thing about a platform like Polar, we have stuff like questions about whether to propose if it’s raining outside or not. Deeply personal and meaningful stuff. Also there’s things like who would win in a fight, Thor or Hulk. Platforms are empty vessels.

When it comes to data, and lots of it, the first question you have to ask is “How will you make money off of this?” Clearly, brands will want to know what people think about them, and they pay a lot of money to get that information, as Wroblewski explains:

We’re focused on making the best product as humanly possible, that’s where our effort is going. We still have a ways to go to make it as good as we can make it. The business model is sort of obvious, businesses want insights from the people who use or don’t use their products. They create 5 page forms that they have to pay people to use them. Here, we have a half a million votes already, and they’re people having fun.

Can Polar turn fun into profit eventually? Maybe they should set up a vote on that. What I do know is that the number of social interactions that the team has collected in just eleven days is pretty impressive, for any startup or any app. It’s worth watching out for and trying out.