Groupon got put through the meat-grinder last week as founder and CEO Andrew Mason defended himself and managed to hold onto his role after another terrible earnings quarter. Now Groupon is getting down to the business of streamlining: Mike DeLuca, the VP of sales for Groupon’s restaurant reservation system Savored (just bought in September), is now also VP of sales for Breadcrumb, the company’s iPad-based point of sale system, the company announced today.

He will report to Rob Kilgarriff, Groupon’s North American head, who himself was only appointed in September.

The move, of course, makes perfect sense for Groupon. If the company is already 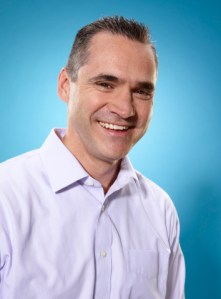 sending people out to drum up business for one service that caters to restaurants, then it should be talking about and selling related services, too.

By offering a more complete portfolio, this falls into the wider remit that Andrew Mason put forward earlier in the year for Groupon to go beyond the daily deal and offer a one-stop shop for local e-commerce.

There is another message here, too, however.

Last week, my colleague Colleen Taylor brought attention to some of the talent drain at Groupon, noting specifically how the whip-smart founders of recently-acquired Adku all left within months. DeLuca joined Groupon with its Savored acquisition — he had played a key role at the company as its chief revenue officer — and so by giving him a bigger role at Savored’s new owner, Groupon is trying to demonstrate that it does recognise leaders and is holding on to them and helping them grow.

DeLuca himself could become a key person for Groupon as it continues to build up its local commerce operations. This is where most of his experience has been for years. Before Savored, he served as SVP at AOL Local, and before that as an SVP at Yahoo.

This doesn’t mean that Groupon is pulling away from daily deals, however. The company, just last week, made a move to expand how it offers its daily deals platform on a wholesale basis for third parties, inking an agreement with Major League Baseball to power its daily deals service.

Groupon Appoints Mike DeLuca as VP of Sales for Breadcrumb

Groupon (www.groupon.com) (NASDAQ: GRPN) announced today that effective immediately Mike DeLuca has assumed the role of VP of Sales for Breadcrumb, the company’s iPad-based point-of-sale system for restaurants, bars and cafes. In addition, DeLuca will remain in his current role as VP of Sales and Operations for Savored, a Groupon-owned restaurant reservation and yield management platform for high-end establishments. He will continue to report to Rob Kilgarriff, VP and GM of North American Sales and Account Management, Groupon.

DeLuca is a 20-year sales veteran with experience at a number of technology companies that cater to local businesses. In the early days of Savored, he played a key role as Chief Revenue Officer, and prior to that he served as SVP of Sales and Operations at AOL Local, where he managed all revenue and operations for a sales team of more than 300 inside and field representatives. DeLuca has also held SVP and VP sales and operations roles at Yahoo and Yodle, a New York-based startup specializing in marketing management tools.

“Mike is a seasoned sales leader with an innate understanding of the needs and operational challenges hospitality businesses face,” said Kilgarriff. “He has greatly accelerated our efforts to introduce both Breadcrumb and Savored to restaurants.”

DeLuca has a B.S. in Communications and Human Development from Boston College.

Founded in New York City in January 2011 by a team of restaurant industry veterans, Breadcrumb is an easy-to-use, powerful and affordable iPad point-of-sale (POS) solution for food and beverage businesses. Breadcrumb removes the complexities, costs and headaches of antiquated POS systems. Plans start as low as $99 per month and include free installation and 24/7 phone and email support. Businesses interested in learning more about Breadcrumb can visit www.breadcrumbpos.com. The Breadcrumb App can be downloaded for free from the iTunes App Store.

Savored is a leading provider of restaurant reservations and high-end restaurants discounts. More than 1,000 businesses nationwide have used Savored’s platform for restaurant yield management to offer diners the lowest possible prices at some of the best restaurants. After booking a reservation on Savored.com and visiting the restaurant, diners enjoy up to a 40 percent discount applied automatically to their bill. Merchants enjoy incremental revenue for tables that would otherwise be empty, and consumers are incentivized by the ‘built-in’ discount and roster of high-end eateries to explore. Merchants can learn more about Savored’s free 30-day trial at http://savored.com/free-trial/ or by calling (877) 801-1209. Consumers can sign up to receive Savored emails at http://savored.com/signup/.

Groupon (NASDAQ: GRPN) is a global leader in local commerce, making it easy for people around the world to search and discover great businesses at unbeatable prices. Groupon is reinventing the traditional small business world by providing merchants with a suite of products and services, including customizable deal campaigns, credit card payments processing capabilities and point-of-sale solutions to help them attract more customers and run their operations more effectively. By leveraging the company’s global relationships and scale, Groupon offers consumers incredible deals on the best stuff to eat, see, do, and buy in 48 countries. With Groupon, shoppers discover the best a city has to offer with Groupon Local, enjoy vacations with Groupon Getaways, and find a curated selection of electronics, fashion, home furnishings and more with Groupon Goods. To subscribe to Groupon emails, visit www.Groupon.com. To learn more about the company’s merchant solutions and how to work with Groupon, visit www.GrouponWorks.com.