It’s been a bumpy ride for Uber. The mobile-first, on-demand limo and taxi service is now in (or is soon to launch in) 24 cities. But, as you’ve likely heard by now, while Uber and its ilk may represent the future of “car-summoning” services, regulators, unions and existing services aren’t always so impressed. The service has faced the most virulent push-back in San Francisco, Chicago, Massachusetts, New York and Washington D.C., where it has faced lawsuits, fines, and cease-and-desist orders and so on.

On Wednesday, news trickled out that Uber is facing fines and charges in yet another city — this time Toronto. The Toronto Star reports that the city has charged the company with “25 municipal licensing offenses, including operaton of an unlicensed taxi brokerage and unlicensed limo service.”

Unfortunately for Uber, this means it will have little time to celebrate two important, back-to-back milestones: On Tuesday, Uber won a big victory in Washington D.C., as the city council approved a “legislative framework for a new class of transportation services,” which essentially paves the way for the service to operate in D.C. unimpeded by litigation. Uber CEO Travis Kalanick called it a “REALLY BIG day” for the company.

Uber then followed Tuesday’s victory by launching version 2.0 of its mobile apps, which included a design overhaul and improved location data among other things, to its mobile experience.

In Toronto, however, Uber finds itself on less solid ground, as city officials continue to dispute the legality of the service. In an interview with The Star, manager of licensing enforcement Richard Mucha said that the company is still not “operating in accordance with the City of Toronto’s licensing bylaw,” meaning that the company needs a license to dispatch. And, in the city’s view, Uber isn’t up to snuff.

The licensing enforcement manager also told the Star that the 20 percent gratuity fee Uber charges as part of its TAXI service is a violation of city law — that any rate above the standard metered fare is illegal.

As a result, Uber and Toronto will be headed to court on January 30th, with the Justice of the Peace overhearing the case. If all the penalties were to be enforced (they range from $150 to $250 for each charge), the total damage could be as high as $25,000 and the Justice of the Peace could go so far as to issue a prohibition order, preventing Uber from operating in the city.

TechCrunch caught up with the Uber CEO Wednesday night to get his take on the situation in Toronto, who said that the offenses are something they had been aware of for some time. “We believe that Uber is operating legally and that a court of law will agree with that.” Kalanick also had some stronger words for the charges, implying that they just might be B.S.

The CEO also said that this was the first time that allegations and charges against the company will actually have gone to court — in most other cases, the charges have been dropped or cases are still pending. “I’m looking forward to our day in court,” Kalanick added.

While the nuances and language of transportation legislation differs in every city, the majority of cases against the company hinge on the fact that it’s operating illegally because it doesn’t license its drivers — nor is does it have a license to dispatch.

However, the problem with that, at least from Uber’s perspective, is that it doesn’t own its own cars or have its own drivers. Instead, the company works with independently contracted drivers from local limo and taxi services, who balance their time between their own business (or that of their employer) and Uber. All of its drivers in Toronto, Kalanick says, are licensed already from their current employers or have licenses as independent operators themselves, and their employers, in turn, already have dispatching licenses. 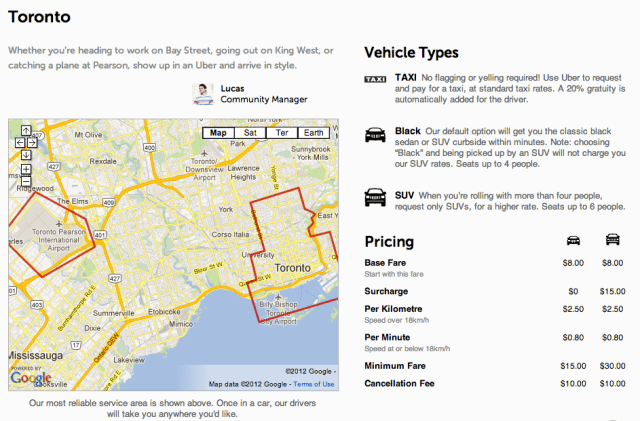 Kalanick’s way of looking at this boils down to this: Why, if Uber solely works with existing providers who are already licensed, insured, and have vehicles that meet regulations, does it need to double up on licenses?

Part of the trouble with unpacking these byzantine claims, laws, and regulations is that when one mentions Uber, it tends to elicit an image of the company’s original black car, sedan service, or “Uber Black.” But the company also operates Uber TAXI (its taxi service) and UberX (its low-cost option), and each of these is subject to different laws and regulations.

Uber TAXI, for example, was chased out of New York City on the grounds that the city found Uber’s (mobile) payment methods to be in violation of contracts it has with the two companies that provide the payment technology for swiping credit cards in the backseat of its yellow cabs. That and the fact that city ordinance prohibits cab drivers from accepting pre-arranged rides.

Again, Kalanick sees this as an example of the anti-competitive regulations cities adopt to protect their cab services and technology contract. In all, this results in a loss for the customer, who ends up paying higher fees as a result. The CEO added that the reason the company has not yet opened for business in Miami is partially due to city law that sets the minimum fare for limo rides at $80, regardless of distance travelled.

In most cases, it comes down to an issue of technology. In New York, the city wants to protect its tech contracts with payment processors and archaic city ordinance prevents cab drivers from pre-arranging rides, which runs counter to Uber (and many other services) allowing users to hit a button and receive on-demand transportation services.

Massachusetts, in turn, claimed that Uber’s technology was “untested” and D.C. city council had to re-write city ordinance to account for on-demand vehicles and sedans that operate through digital dispatch. 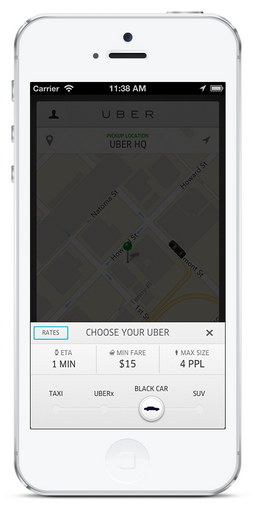 Each case is different, but all roads lead to cities having to change their policy: In Chicago and D.C., regulators have already moved to re-write laws to either accomodate Uber or shit it down, whereas in California and Toronto, cities have instead opted to issue citations. In the latter cases (and elsewhere), while this opens the door for a dialogue, eventually cities have to take a stand on one side or another.

Like other cities, in Toronto, local transportation laws don’t account for advances in technology. Under the city’s municipal code, for example, “pre-arranging” limo or sedan service can only happen by “a written or oral reservation made with a limousine service company.” So, technically, arranging pickup by way of some newfangled smarty-pants app is in violation of city law.

Furthermore, as stated earlier, Toronto city officials take issue with Uber TAXI’s 20 percent gratuity fee because it’s an additional charge above the metered fee, and they want to protect their customers from unfair pricing schemes. Kalanick explains that, in fact, for a $10 meter fee, the driver pays Uber 10 percent, or $1, and there’s an automatic tip that’s processed into the charge — $2 in this case — 100 percent of which goes to the driver.

That’s the same way it works in a laundry list of local businesses. Go to get your haircut and you might find your barber paying a percentage of the price of the haircut to the owner of the shop for his or her seat, while customer gratuity (tip) goes to the barber. The CEO, naturally, thinks this gives customers and drivers a better deal.

Nonetheless, as Uber moves into new cities, ultimately it ends up having to spend a lot of its time making peace and educating city officials on how its service works, how its technology works and how it benefits the customer. It’s also employed some of its own lobbyists to help sell its case to regulators.

Playing the political game is proving more fruitful for Uber than taking the “damn The Man” approach, and, if you believe that Uber’s service is in fact disruptive, then it will have to educate and lobby. The company hopes, too, that its win in D.C. could help set a precedent in other cities. While the victory wasn’t at the federal level, there’s still some symbolism in getting a stamp of approval in the nation’s capital.

In Toronto’s case, The Star reports that the city is currently “reviewing its licensing bylaws with regards to taxi cabs,” with Uber’s mobile technology likely to be the focus of those discussions. In the end, Uber may still be subject to fines, but if it succeeds in pushing the city to amend its laws to include digital dispatch, it’s a net gain — and a big one. If that happens, Toronto could well represent a tipping point for Uber in its ongoing battles with city officials.

While that could set the stage for smoother landing for Uber in other markets, it still doesn’t mean the door is open for P2P services like Lyft and SideCar. Unfortunately, that’s a separate kettle of fish altogether.