I just downloaded the latest version of Uber, and I was presented with a brand spanking new design, as well as message announcing Uber 2.0, explaining that it’s “a thorough overhaul” and that “as one of our top riders, we’re giving you the keys to our latest iPhone app before anyone else.” (Hey, I do spend more money on Uber than on food.)

The company declined to comment for this story, which is a bit odd, but we’ve heard that it’s throwing a party tonight, so there’s a good chance that’s when it plans to officially launch the app. To be clear, version 2.0 (or, technically, version 2.1.0) is already available in the Apple App Store, but it sounds like not every user is seeing the new design.

That also means I have to do some guesswork to figure what’s actually new. The basic functionality is the same, allowing you to call a driver to pick you up at your location, pay within the app, rate your driver (or if you’re a driver, rate your passenger), and so on. (Uber started out focused on towncars, but it has since expanded into SUVs and taxis, though the exact selection varies by geography.)

But as I mentioned above, there’s a cool new design, with some nice tweaks. For example, I can now see which direction the available cars are facing (which can make a big difference in San Francisco, where a car pointed in the wrong direction can equal an extra five minutes of waiting). And when I choose a pick-up location, the pin shows how long the wait is for the nearest driver — that information was available in the older version of Uber, but it’s been moved to the center of the screen, and it seems to be loading more quickly. 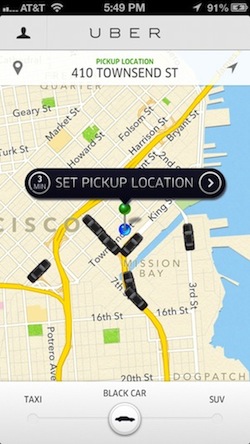 And although Uber is still using Apple’s new maps, the underlying location data seems to have improved. (I reported that Uber was planning something in this vein, although we’d heard that it would happen a month ago). At the very least, I noticed that after the maps update, Uber drivers often struggled to find the TechCrunch office, and the address would show up as a bike route, leading to lots of confused phone calls and cancellations. On the other hand, when I opened the app today, it immediately detected that I was at 410 Townsend St. Probably related: The new app pulls location data from Foursquare, and you can choose a Foursquare location as your pick-up spot.

Oh, and another addition that should be useful for people who are concerned about price (which is one of the common complaints about User) — you can enter your destination, and Uber will give you an estimated fare.

There’s probably some other new stuff that I haven’t noticed yet, but overall, I’m pretty impressed.