Dalton Caldwell, the co-founder and CEO of Twitter competitor App.net, took the stage at LeWeb Paris to talk about the Internet of Things and how to make money on it by helping users make sense of the noise that the new Internet-connected sensors will soon create.

Caldwell started his talk by saying that he “wants to talk about noise.” Today, he argued, the “Internet of Things” era has already begun and the fact that we have thermostats that talk to the Internet is great. At the same time, though, this means we have to process so much data that it’s hard to find the signal in all of this noise. All these sensors, he says, will lead to noise problems, and the right filters just haven’t been developed yet. 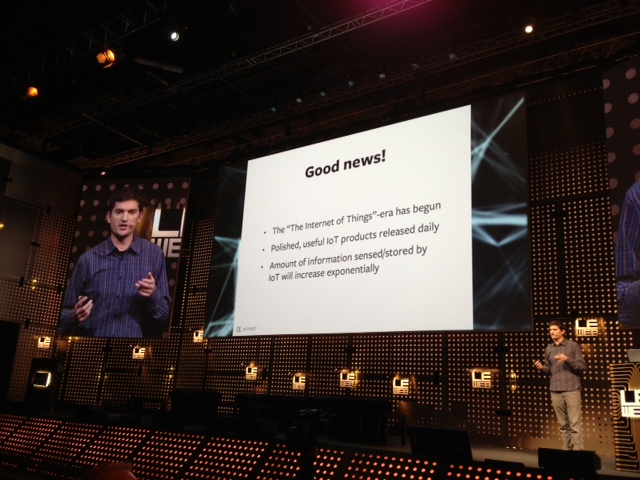 The other problem here is also that it’s easy to build sensors but very hard to build filters. We can’t keep up with our email, Caldwell argued, so how will we keep up with all of this raw data that will be generated by the Internet of Things. 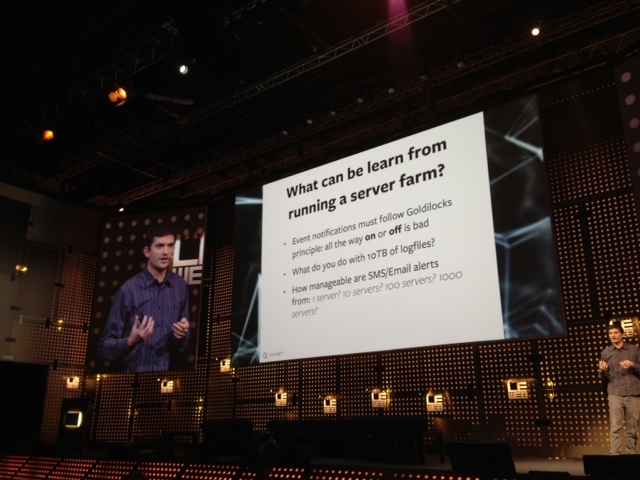 Caldwell says that as we think about fixing this problem, we can look at how administrators handle emergencies in data centers. To make sense of the noises made by thousands of servers, admins have to constantly readjust their alert notifications to ensure they don’t miss important messages in their megabytes of log data. Data center admins tend to use SMS alerts when servers go down, but that just doesn’t scale once you get to thousands of servers. We will face the same problem on the Internet of Things.

The same problem, of course, also exists on social networks, as users auto-tweet stories and continue to post massive amounts of auto-generated data. Consuming unfiltered streams has simply become too hard for many users. Social networks manage this by filtering your streams, but how can we deal with this on the Internet of Things?

Caldwell says people will use the traditional email, SMS and social streams to filter their raw Internet of Things data. 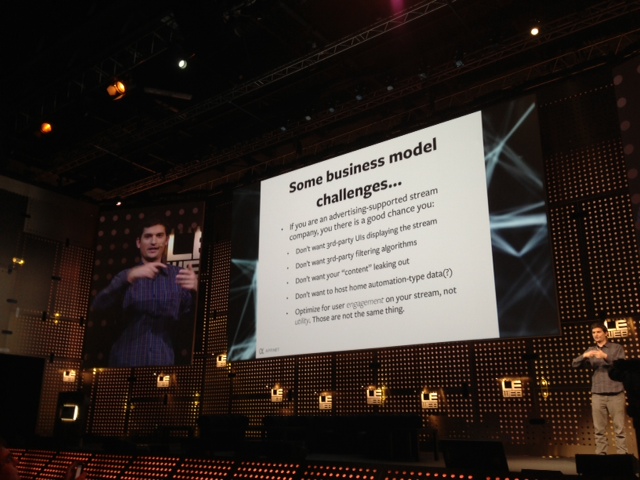 For consumers, the best business model, he said, “is an unbundled stream” with pluggable APIs, pluggable filters of a unified stream and pluggable UIs and methods of stream consumption. In Caldwell’s view, current examples of unbundled services are the likes of IFTTT, third-party Twitter clients and Flipboard. App.net, he said, is another example of an unbundled stream because it is simply the best way to create great user experiences.

The overwhelming amount of information we have to consume is a major problem, and developers will have to figure out how to make all of this data useful and actionable. To him, this is more important than just creating “cool gadgets” and things that just work in certain ecosystems.