Apple’s new redesigned iMac marks a significant departure from a physical design that the company has basically used for its all-in-one desktop since 2007. The 21.5-inch iMac represents a significant visual change and packs a lot of new stuff inside the entry-level $1,299 version as well, which is the one I received for testing. Here’s how it performed as my primary machine over the course of a few days.

Internal changes aside, the iMac’s first impression is based on that new, tapered shell with the 5mm thick edge. It makes the screen seem like it’s just floating in air and, combined with a redesigned display that makes content seem much closer to the glass, has the effect of making the computer look like a store prop when it’s powered on and sitting idle. My family was in town for the weekend, and all were very impressed by the new display – the fact that it was sitting next to my 2008 iMac at the time only served to heighten the effect.

All that fat trimming has led to some omissions, of course; the new iMac doesn’t have a built-in optical drive, and it also lacks user-accessible RAM. Memory could once be swapped out using just a screwdriver, thanks to doors on the underside of the iMac’s “chin,” but now you’re essentially stuck with the memory loadout you select at checkout.

It’s not a huge issue, but it means strongly considering paying an additional $200 to max out the 21.5-inch iMac at 16GB is probably a good instinct, especially if you’re not planning to upgrade to a new computer for a few years. As for the optical drive, you can pick up Apple’s Superdrive (or any other external drive), or you can probably live very happily without given how pervasive digital distribution and other options like SD card (the iMac comes with a built-in reader) and Flash-drive storage are now available. Finally, as with previous generations, the 21.5-inch iMac does not feature a removable stand for VESA mounting, but new to this generation is the fact the 27-inch one apparently seems to lack this capability as well. 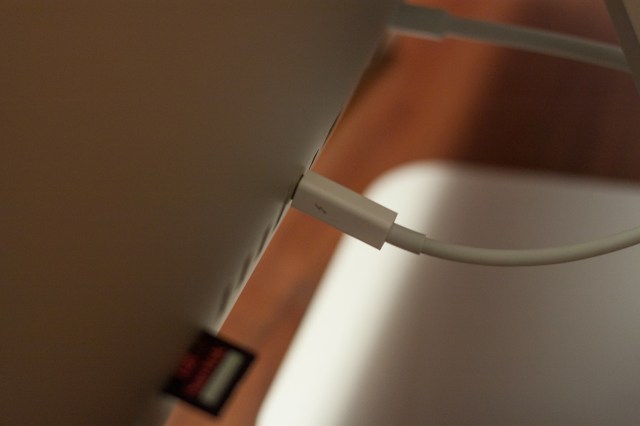 This revamped iMac hardware is a huge improvement over previous generations in just about every way that matters. The weight and space savings are nice, as are the addition of two Thunderbolt ports that can both power external displays, and 4 USB 3.0 ports for high-speed connections, but the screen is the real game-changer for long-time iMac owners. Apple claims a 75 percent reduction in reflection. While that is hard for me to quantify, I can say that, because my office has a rather thin curtain, I’m often in near-direct sunlight while working, and the difference is considerable. In general, the screen feels much improved in all tasks, but editing photos in Lightroom was an especially pleasant experience on this computer versus on my 2011 27-inch iMac.

The 21.5-inch iMac delivers solid improvements over previous generations in terms of benchmark scores. I found that it consistently scored above 9,000, putting it ahead of its predecessor by at least 1,000 points on average, according to Geekbench’s comparison browser (a higher score is better). Numbers aside, the iMac truly impressed in terms of executing everyday tasks, including running Photoshop and Lightroom, as well as rendering and editing video in Final Cut Pro X. It does have a dedicated graphics card (the NVIDIA GeForce GT 640M with 512MB of dedicated RAM), but it somehow feels faster than you’d expect it to from just reading a stat sheet. Mostly, I’m comparing it against my experience with my 2011 27-inch iMac – my 15-inch Retina MacBook Pro with its SSD storage still feels faster on the uptake all around, but that’s to be expected. I’d love to see how the Fusion Drive hybrid approach stacks up, but unfortunately that wasn’t available in my review unit.

Speed and processing power are only one aspect of performance. The iMac also scores high in another respect: audio/visual performance. The new model comes equipped with dual mics, which did indeed seem to help me come across clearer to FaceTime call receivers, and the built-in stereo speakers definitely produced better sound than either the 27-inch iMac or the 27-inch Cinema Display I had on hand. Even my audiophile father commented on the sound quality improvements while he was visiting and we were watching trailers via Apple.com. 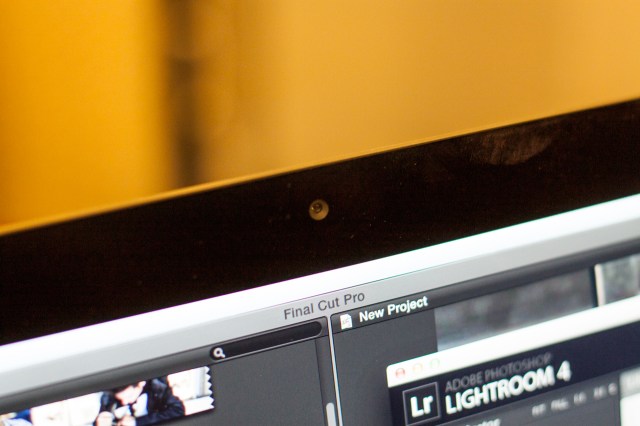 If you’re familiar with OS X, then you can probably skip this section, but it’s worth talking a bit about Mountain Lion and how it works on the iMac for those who may be coming over to Apple for the first time (and I think this machine could attract a few switchers). The iMac especially benefits from some of the changes made to Mountain Lion.

One in particular is search in Launchpad. This feature adds a lot to a desktop-computing experience, especially when you’re primarily using a mouse and keyboard rather than a trackpad. Search on every page makes Launchpad an actually useful launcher, instead of just something you find yourself scrolling through mindlessly looking for an app whose icon you can’t seem to spot. Another very nice feature on the iMac is Dictation, which is noticeably better thanks to the background noise-eliminating power of the dual mics. I talk like I’ve got a mouth full of marbles, so this is a feature addition that brings more than a minor benefit to me in particular.

The 2012 iMac is an update that pushes the needle in all the ways we’re used to from Apple – improved performance, better hardware under the hood, etc. – but it also adds the most dramatic and attractive case redesign in recent memory to the mix. This is both nice from an aesthetic perspective, and a welcome change for anyone who needs to move their all-in-one around or just wants it to take up less space on the desk. It also works in target display mode, making it a sleeker (albeit more expensive) alternative to a Thunderbolt Cinema Display as a second screen for your Mac notebook. Some might gripe about the sacrifice of the built-in DVD drive, but in my book that’s not even a noteworthy admission given all the improvements on board, including many more high-speed I/O ports than previous generations have offered.

This is a great time to jump on board with iMac, since Apple will likely stick with this design for a while now, and future iterations for the next few years will likely be less dramatically different. I’d spring for the extra 8GB of RAM were I to go with the base model, but that’s just personal preference. The base model iMac should satisfy the computing needs of most, even with the default configuration.