Facebook has integrated feedback from regulators and users into a clarified set of site governance and privacy policy changes, and starting now, users will have seven days to vote for or against them. They’ll lose the ability to vote on future changes unless 30 percent of all users vote and the majority reject the proposal. Such a high turnout is unlikely, so this will likely be the last governance vote.

All users will soon receive an email alerting them to the vote on several important changes to Facebook’s Statement Of Rights And Responsibilities and its Data Use Policy. You can read my analysis of the impact of each of these changes here, but to recap, users will vote on whether:

VP of public policy Elliot Schrage just opened the voting period with a post to Facebook’s Site Governance Page. He says that the core clarification based on input from the Irish Data Protection Commissioner is that Facebook sharing data with affiliates is legal standard-industry practice. Schrage explains that “We’ve revised this proposal to make it clear that the sharing of information among our affiliates is and will be done in compliance with all applicable laws, and where additional consent of our users is required, we will obtain it.” 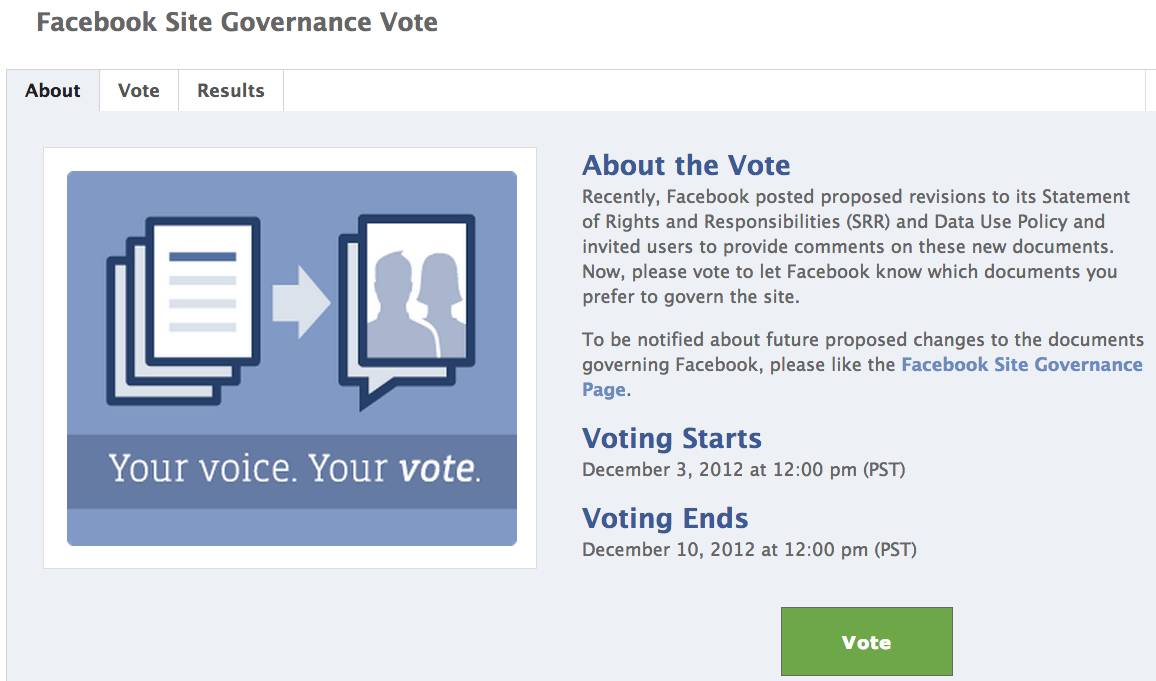 The bulk of feedback received during the one-week commenting period centered around Facebook’s plan to abolish the broken site governance voting system. Facebook has responded to this input, saying:

“Some of you were concerned that by ending the vote mechanism, you were losing your ability to shape the policies that govern Facebook. To be clear, our goal in modifying our site governance process is to make sure that we receive feedback from you in the best, most productive way possible so that we can be responsive to your input. Many of you provided us with ideas on how we could continue to meet that goal. You pointed out that our decision to update the process gives us an opportunity to innovate and search for new and better ways to enhance participation. We agree and will incorporate your suggestions into creating new tools that enhance communication on Facebook about privacy and governance. “

Basically that means Facebook is not revising its plan to eliminate, which some users might not be happy about. The old system certainly didn’t work well, but removing it altogether doesn’t seem like the answer. There may have been a chance for a compromise, but Facebook has shot that down. 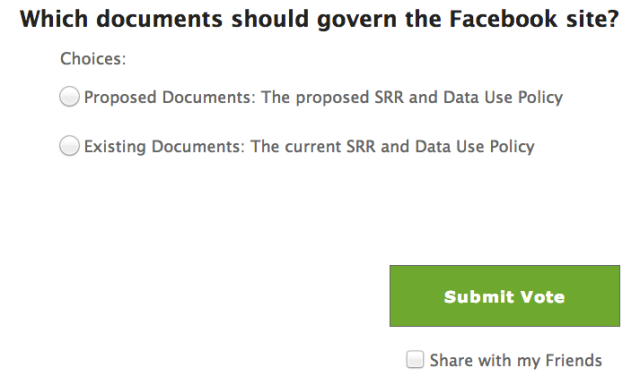 All Facebook users may now visit the third-party Facebook app developed by thuzi to cast their ballots for or against the changes. If under 30 percent of Facebook users (roughly 300 million people) vote, Facebook will merely take their decision under advisory and can push the proposed changes if it wants to. If more than 30 percent vote, their verdict will be binding, and they could prevent Facebook from implementing the changes. An independent auditor will review the results.

Voting will end on December 10 at 12:00PM (PST) and Facebook will hold a live webcast to answer questions on December 4 at 9:30AM (PST). Since only 380,000 voters turned out last time, it would take some massive global wake-up for even close to the necessary 300 million ballots to be cast for the vote to mean anything.

You can see the changes below in red and can cast your vote here. Choose “Existing Documents” if you want to retain the ability to vote on changes and want to reject the rest of Facebook’s proposed modifications. As of an hour after the voting started, roughly 1,000 votes have been cast and about four-fifths of users prefer the old documents and retaining their option to vote on changes. 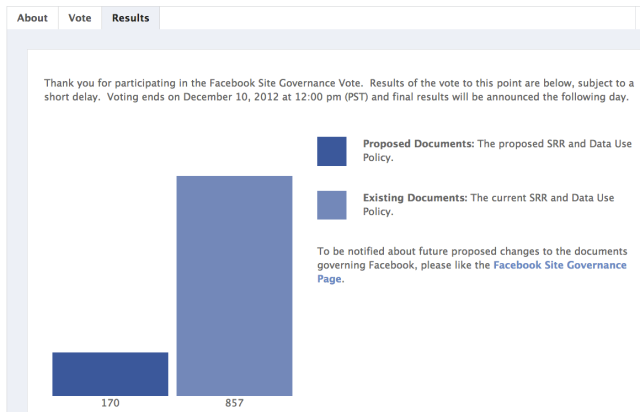