In 2011, Brian York founded Enthuse as a way to give fans the ability to connect with their favorite sports teams via their mobile devices and get rewards for checking into games, snapping photos and sharing the love. On the flip side, Enthuse enables schools and sports franchises to integrate with their API and SDK to quickly deploy social loyalty programs in their own branded apps.

To help it gain momentum and go after more collegiate and professional franchises, the startup is today announcing that it has raised $1.3 million from Allegro Venture Partners, Bee Partners and a handful of angel investors, including Maurice Werdegar of Western Technology Investment, Greystripe co-founder and YesVideo CEO Michael Chang, Peggy Taylor of B3 Ventures and a former senior exec at PeopleSoft and San Francisco 49er, Harris Barton.

So what’s the appeal? For starters, while mobile loyalty programs abound, York tells us that it’s a green field when it comes to sports. Most startups and companies are focused on ticketing or are more broadly focused on concerts and live events, so they think they have the opportunity to bring social loyalty to sports teams by allowing easy integration with the apps that teams already have up and running.

Enthuse has partnered with schools and organizations like the University of Miami, Butler, the University of North Carolina, Popchips and Jimmy V Week (ESPN), which have built rewards programs on the Enthuse platform and distribute the app to their fans as a way to earn points, increase engagement, and dole out rewards.

On the fan side, the startup began with the launch of an iPhone app earlier this year and is today officially announcing the release of their Android app, which allows users to win real rewards and fan experiences, whether or not their favorite sports team has partnered with Enthuse. For example, even though the Red Sox haven’t partnered with the startup, fans can still use Enthuse to win a month’s supply of Popchips just by using the app.

If fans follow one of the app’s listed teams or event partners, they can then unlock extra rewards that the startup’s partners make available exclusively to their fans. As another example, Enthuse recently worked with Audi Birds of Prey (a major national ski event) to allow fans who follow the event on Enthuse to get access to rewards from GoPro, Helly Hansen and Maui Jim Sunglasses as a way to reward both the fans who attend the event, as well as those who can’t make it but want to follow along and engage on their mobile devices.

Enthuse is also looking to partner with major league sports franchises to build their programs on the Enthuse platform. They’ve already signed a deal with several NBA and NHL teams (as well as IndyCar) and, on the collegiate side, recently struck a deal with the America East Conference to distribute Enthuse to all nine of their schools beginning on January 2nd.

Through Enthuse’s platform, these teams have the ability to access a control panel that gives them increased visibility into fan social engagement, allowing them to schedule notifications for fans at events or watching virtually, create “challenges” to drive particular behaviors, and customize rewards campaigns while measuring results through its analytics pages to demonstrate ROI. 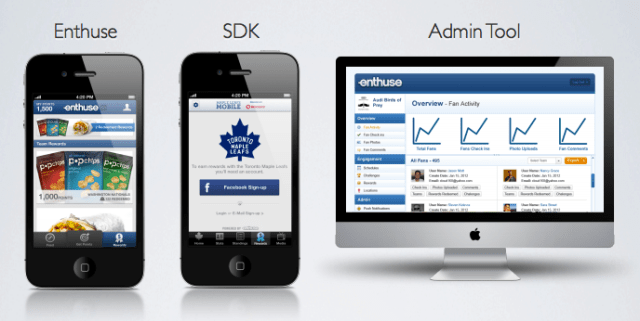 While the startup’s Android and iOS apps are free, it plans to monetize its sports-loyalty platform by offering its SDK and admin tool to colleges and pro sports teams for a monthly rate, beginning with “Starter” at $2K/month (which includes notifications, analytics, a fan location map, and an account manager) and working up from there in terms of price and features.

Last week, ESPN kicked off its week-long “Jimmy V Week” to support cancer research and, to support the initiative, fans will have the ability to engage via Enthuse and collect points toward rewards and experiences during games this week — including an ESPY package, where the winner and a guest will get to attend the ESPYs for free.

Readers may wince at the existence of yet another social-loyalty platform, but the second-screen experience is becoming increasingly popular for sports fans. As Enthuse brings on more partners, this could prove to be a great way for brands and teams to stay in touch with their fans and keep them engaged and up to speed. After all, who doesn’t love free stuff from their favorite sports teams?