RIM’s global market share dwindled to just 4.3 percent in Q3 (IDC’s figure) but BlackBerrys are still wildly popular with a certain cash-strapped sub-set of mobile users in parts of Europe: namely teenagers. The latest data shining a light on a rare RIM stronghold comes from a wide-ranging research report looking at mobile users’ habits in France, Spain and the U.K. The annual report, commissioned by carrier Orange, suggests advertisers “must not write off BlackBerry if they are to successfully engage with a younger audience”.

The report found that BlackBerry penetration amongst teenagers in the UK and Spain was two and three times higher respectively than the overall “mobile media user” population. The researchers use the term “mobile media user” to refer to people who use a mobile device for rich media and communications, such as IM, social networking, streaming video, email, browsing the internet and location-based services, rather than just talk and text.

In Spain, the research indicates that RIM’s devices are in a healthy majority of teens’ back pockets, with 64 percent of 11 to 17 year-olds in the country owning a BlackBerry. While, in the U.K., RIM’s grip on the youth market is also strong, if not quite as fuerte as in Spain — with close to half (46 percent) of U.K. teens owning a BlackBerry.

RIM’s French fortunes are not so fair: just 14 percent of teens in the country own a BlackBerry. An Orange spokesman suggested this could be down to the device not being directly marketed to teens in the country. Meanwhile, iPhone penetration was “unsurprisingly low” in the teen age-group across all the surveyed countries — doubtless owing to the relatively high cost of Apple hardware.

The research was conducted by TNS for Orange’s annual Orange Exposure consumer study looking at the usage and habits of mobile media users in France, Spain and the U.K. Three hundred teenagers (in the 11 to 18 age range) were surveyed in each country, in addition to 1,000 mobile mobile users per country. The research also involved a “calibration phase” consisting of 2,000 face-to-face interviews per country. Research was conducted in three waves, between March and August this year.

The age distribution of the iPhone is more even, according to the research, with a third (33 percent) falling in the 16-to-24 age group versus a similar proportion (27 percent) in the 25-34 bracket, and 28 percent aged 35-49. iPhone ownership in the 50-65 age-bracket stands at just 11 percent.

Samsung mobile device owners have a similarly even age spread as the iPhone, albeit with the largest proportion (33 percent) falling in the 35-49 year-old age bracket. A quarter are aged 16-24, according to the research, and just over a quarter (26 percent) are 25-34. The Korean mobile maker has also managed to push into the 50-65 age range, with a relatively high 16 percent of Samsung-owning mobile users falling in this range — perhaps down to the company’s strategy of offering an extensive portfolio of devices at a wide variety of price-points.

Of all the brands listed, Nokia has the largest proportion of device owners in the 50-65 year old range, with just over a fifth (21 percent) of Nokia users falling in this age.

Aggregating the data across the age ranges, but breaking it out by country, just over a fifth (22 percent) of “mobile media users” own BlackBerrys in the U.K. and in Spain, while in France the figure is just 12 percent. In the U.K. 31 percent are iPhone owners (up from 26 percent last year), while in Spain 20 percent own iPhones (up from 13 percent last year). In France, the iPhone figure stands at 28 percent.

In all three countries the generic category of “other smartphones” accounts for the majority of devices owned — the vast majority of which will be Android-based devices, such as Samsung’s Galaxy range of smartphones 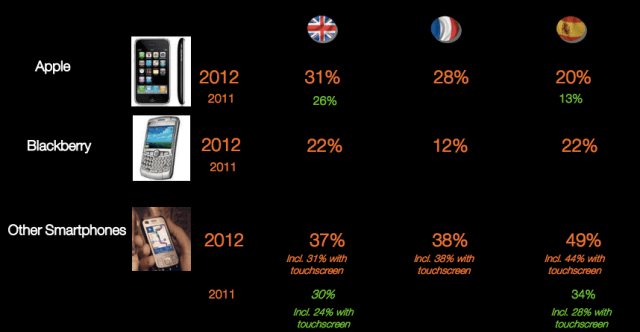 Here’s the report’s breakdown of tablet type by country 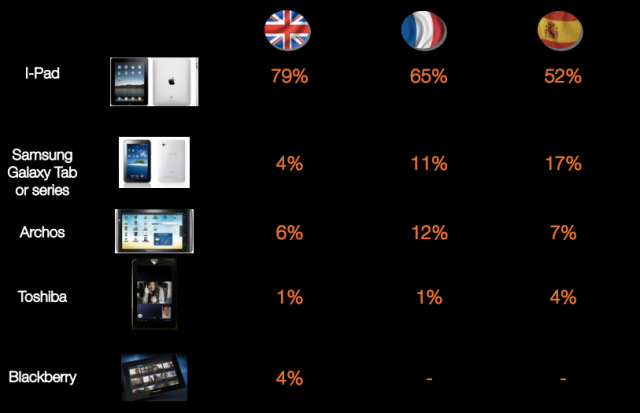