According to a new report from mobile app analytics firm App Annie, Google’s Play software store is gaining on rival Apple’s iOS app marketplace. The revenue gulf between the two stores is often cited as a reason why Apple is able to attract more top-tier developers and quality titles, so a lessening of the gap between the two in that respect is particularly significant.

iOS revenues still take the cake, according to the report, sitting pretty at four times the size of those coming in from Google Play titles. But where iOS revenue actually contracted during the month by a slight percentage (0.7 percent), Google’s actually rose considerably (17.9 percent). Revenues in Google Play are up 311 percent overall since January 2012, and downloads on Play are up 48 percent overall, with global free downloads still 10 percent higher on iOS. App Annie notes that Google Play’s download growth has dropped off during the last month considerably, however, and that raises some question about whether or not both companies might be approaching a plateau in this regard.

The report also reveals some interesting changes in the trends regarding which countries account for the greatest percentage of app sales and downloads. These numbers paint a changing picture of who has the most influence over mobile software in terms of audience size: China is growing fast, accounting for 15 percent of global app downloads on iOS, while U.S. share has dropped from 30 to 26 percent of downloads during the course of 2012. In Google Play, the U.S. accounts for 21 percent of downloads, with South Korea, India and Japan occupying the next top three spots. 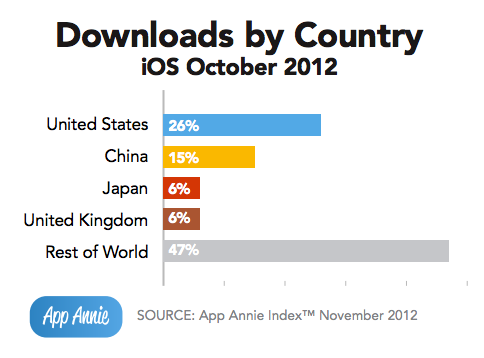 Revenue by country is a different story; in both the iOS and Google Play app economies, the U.S. has a significant stake when it comes to money generation. But in Google Play, Japanese revenues have taken off in the past few months, and have actually surpassed the U.S. in terms of how much mobile app consumers spend.

Gaming accounts for the majority of the top revenue-generators on both platforms, and in some good news for Zynga, it’s actually the only U.S.-based that appears on both the top 10 charts for both Google Play and the App Store when it comes to top publishers. EA dominates the iOS app charts, but it’s followed by relatively small publisher Supercell out of Finland, which has only two titles so far. Applibot and Kabam are also relatively small publishers with strong positioning on the iOS charts, meaning upstarts can still hold their own with the big dogs on Apple’s marketplace. On Google Play, Japanese and South Korean companies dominate the charts. Apple and NAVER (maker of smash hit Japanese messenger app Line) are the only companies that don’t make games, and which appear on the iOS and Google Play charts respectively.

This report tells a very interesting story regarding mobile app store growth and revenues, one that suggests we could see major changes next year with regards to Google’s positioning relative to Apple with developers, as well as shifts in importance in terms of which world markets developers focus on.