Kiosked, a Finnish startup that raised $5.75 million from Rovio’s elusive chairman Kaj Hed after bootstrapping for several years, is finally starting to show off what it’s been working on.

Naturally, the company’s products are starting to appear with Angry Birds merchandise on Rovio’s Facebook page. Kiosked is trying to change affiliate marketing by making videos and images more interactive with direct links and e-commerce promotions. The company’s technology turns any image or video into a storefront where links to products can pop-in from the right-hand side.

Kiosked is already working on videos that Rovio is starting to share including this one, featuring Angry Birds jumpsuits. Kiosked’s widgets will also eventually end up appearing in many of Rovio’s tablet games, enabling players to buy goods directly from their apps. 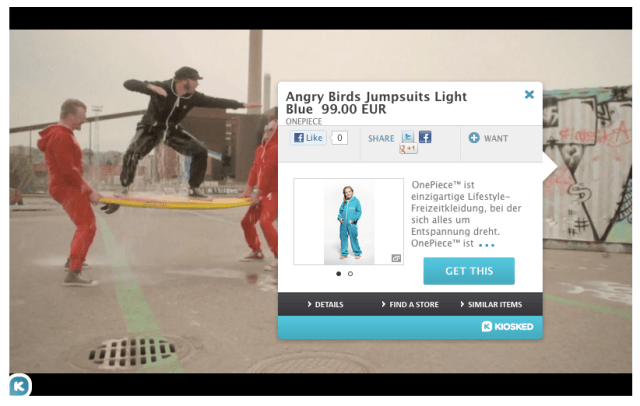 “It’s not intrusive. You can go and see what the products are, then go directly and buy them,” said Lars-Michael Paqvalén, the company’s CEO. Kiosked converts images and video files automatically and they work in both Flash and HTML5, making them accessible to mobile browsers.

On the other side, Kiosked tracks the actions of viewers and whether they generate actual leads for brands. They also track the ratio of leads to views.

“We track every movement. This is why we built this ourselves. We wanted to give this information back to the brands,” Paqvalen said. “They want to know what’s requested and where and in what context.”

The company’s technology also changes the ‘Kiosk,’ depending on where the user is coming from. Visitors in the European Union will see prices in euros, while U.S. ones will see promotions denominated in dollars. Kiosked will eventually providing standard APIs and SDKs for third-party developers that want to monetize their content.

They split affiliate revenue 50-50 or work out special agreements with large individual publishers.

There have been many, many companies that have attempted what Kiosked is trying to do including Google Ventures-backed Luminate (which used to be known as Pixazza), ThingLink and Stipple. The challenge facing all of these companies is signing up publishers and brands. To operate at scale, they either need to go out and develop individual relationships with publishers through a strong BD team or salesforce, or the product needs to be compelling enough at generating additional transactions that publishers will pick up the technology on their own.

The company only recently took funding, but it already has north of 40 employees. Paqvalen had largely bootstrapped the company for two years before that, although the Finnish government’s funding agency for technology also contributed initially (as it does with many startups from the country). Before starting Kiosked, Paqvalen had founded an enterprise mobility startup called Telepo.