Video-sharing site Vimeo has updated its iPhone app, working to improve its upload process and simplify navigation for watching other people’s videos. A lot of the big changes in the iPhone app revolve around things that Vimeo has taken out, rather than what it’s put in. For instance, the app has streamlined the process of getting their videos onto Vimeo, first by removing the editor — which not a lot of people used anyway — and by making uploads a lot faster.

Vimeo has improved the upload process by having them begin in the background, as users are entering in the title of the video and other metadata. It also provides a status bar, so users know how much of a video is left to upload, and provides the ability to pause and restart uploads. And it automatically manages uploads, so that users don’t have to restart them from scratch if the iPhone loses or regains connectivity.

But the app isn’t just for shooting and uploading — it’s also for video consumption. And so, the video browsing and navigation portion of the app have been improved as well. It’s moved from a grid approach to a tab-based approach for browsing, with just four buttons on the bottom of the app. In addition to a camera button for shooting, the new Vimeo app makes it easier to poke around different categories of videos, as well as a user’s own feed and “watch later” queues. 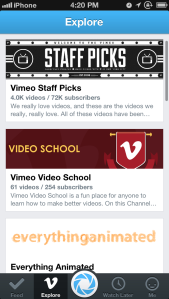 Unlike previous versions, the latest update to the app was built entirely by the Vimeo staff, as it seeks to bring more development in-house. And it’s likely the first in a series of facelifts that apps will undergo, as Vimeo follows on the relaunch of its website earlier this year to make apps on other distribution platforms more beautiful and easier to use.

Vimeo is based in New York City, and reaches more than 85 million viewers per month, according to comScore data. In addition to its new iPhone app, IAC-owned Vimeo has been working on new monetization features. It added a “tip jar” in September, and previewed the first of its pay-to-view features earlier this month. It’ll be rolling out that feature to other users early next year.