Skype has just updated its iOS app, making it much easier to merge Skype accounts with your Microsoft account.

Microsoft recently decided to phase out Windows Live Messenger in favor of Skype, finally putting the $8.5 billion acquisition to good use, which allows users to Skype with Messenger, Hotmail, and Outlook.com contacts.

To enjoy the update, users can sign into Skype with their Microsoft account and all the information, including history and contacts, will immediately be merged with their Skype account. 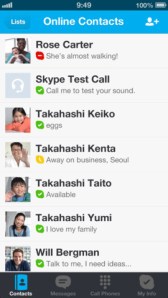 The update also brings with it a few other nice features, like the ability to edit individual messages by tapping and holding down on a message.

Knowing that iOS users are now accustomed to Emojicons, the update has included emoticons, both animated and stagnant, that can be placed in IMs on Retina-equipped devices.

As with any update, Skype has also included some bug fixes but neglected to specify which bugs have been fixed.