It must be the day for Gmail platform apps – earlier this morning, TechCrunch announced the launch of a startup that automates contact management via Gmail, and now another company is debuting a new way to visually scan your email messages. Available as a Google Chrome application, PhilterIt organizes email messages by sender, allowing you to browse your email by scanning icons and logos, instead of subject lines, in your Gmail sidebar.

PhilterIt, for those unfamiliar, first launched its visual web-based email client in June 2012, offering users an alternative interface to their current inbox. But not too surprisingly, the company quickly found that users were reluctant to abandon their current setup for something this experimental. That’s why the startup is today introducing this Chrome application instead. PhilterIt for Chrome works as a browser extension to add functionality to Gmail, similar to other add-ons like those from Boomerang, PowerInbox or Rapportive, for example (to give shout-outs to some of my personal favorites). 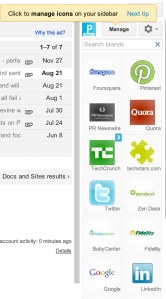 After installation, the extension scans your inbox for mail you received in the last 30 days, then allows you to check off which brand emails you want to see visualized in your Gmail sidebar. It’s a handy way to locate those messages which are sometimes known as “ham” (as opposed to “spam”) – that is, the emails you’ve authorized or signed up for, but aren’t as urgent as work-related or personal messages. This includes things like social updates, daily deals, travel emails, messages from e-commerce sites, newsletters, and more.

After selecting the brands you want to filter this way, PhilterIt snaps over to the Gmail sidebar on the right side of the screen. Here, you’ll see the icons for the companies you chose, as well as a small notification if there are unread emails in that section. To view the emails for a given brand, you just click the icon. In tests, moving in between the sections happened fairly fast, although it seemed to have trouble locating some (but not all) of the messages I had pre-filtered using Gmail’s rules. (Admittedly, I’m a rule fanatic, so it could be that I have so many it caused a conflict. I hesitate to believe that this will be everyone’s experience, as I’m something of an edge case here.)

While initially, the product is focused on brands, the company says it will soon support people, too, which could make for an interesting VIP section for your inbox – one you’re more in control of than Google’s own “Importance” algorithm in its Priority Inbox, perhaps.

If you have a bunch of Gmail extensions installed, things can get a little crowded, of course. And since Rapportive is a must-have for me, it’s nice to see that PhilterIt can collapse to the sidebar when not in use to give you more room. There’s clearly more work to be done with this one, but PhilterIt is attempting to solve the info overload problem, and for a heavy email user like myself, that means it’s now one I’m keeping an eye on.