Technology is increasingly becoming a part of the classroom experience, particularly thanks to smart devices. Tablets and iPads offer students a more portable, engaging and interactive experience than many of the tools of old, and schools are catching on. The San Diego School District’s recent purchase of 26,000 iPads is just one of many recent examples of districts and states pushing to deploy tablets in their schools.

The problem, however, is that, while the use of smart devices and learning-management systems is growing (and the quality, especially of the latter, is improving in turn), many schools still lack the infrastructure that would enable their various digital tools to work together. Not to mention, if schools don’t have a secure, working Wi-Fi network, there’s little point in buying 26,000 iPads.

This is where iSchool Campus thinks it can help. Launched in 2011, the Utah and Washington D.C.-based startup has developed a collaborative, “whole-school” learning environment that includes iPads (for each student), teaching and classroom-management tools and hardware all integrated into a secure Wi-Fi network. The startup is initially targeting K12 schools and districts, but with blended learning gaining in popularity, iSchool sees application for their infrastructure in both public and private sectors and is currently in discussions with government-training facilities.

iSchool has been running pilot smart school programs at 13 charter, private and public schools in the U.S. (across eight states) and is looking to expand its reach both into more K12 schools and enterprise training programs. To help fuel that growth, the company is announcing today that it has raised $2 million of a $4 million Series A funding round led by Crocker Ventures. 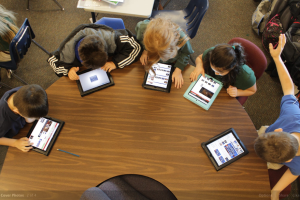 There’s a lot of noise being made about creating and implementing “wired classrooms,” and while that’s becoming more of a reality and less hot air, Chairman and CEO William Nixon tells us that many classrooms have the software component already but are still lacking the hardware. Schools are beginning to demand a holistic, or integrated, approach. iSchool’s approach to this is to establish a high-speed Wi-Fi network across the school, through which it integrates its hardware offerings, which include iPads for each student and teacher, an iMac lab, Macbook Pros for teachers, HDTVs, a remote audio system, classroom-management software and professional development tools.

Through the company’s classroom interface, teachers can then deliver and monitor curriculum, quizzes, tests and apps on their students’ iPads, which the company believes can help the classroom become a more wired, engaging and data-driven learning environment. While iSchool Campus aims to be an end-to-end educational solution, much of the experience (at least on the student’s end) revolves around the iPad.

The iSchool CEO tells us that the company has been working closely with Apple to configure its devices, particularly on specs, system configurations and government regulations, and is taking advantage of the special rate Apple offers to K12 schools using its hardware. As a result, the company is focused on using Apple hardware (at least for tablets, laptops, and desktops), but is open to using other devices. And as to whether students will be given the new iPad as opposed to the first generation? The company says that it only deploys “the latest hardware and software” unless schools specifically request otherwise.

iSchool Campus installs its own proprietary apps on all iPads deployed in the classroom, which focus mainly on classroom management and teacher/class interactions, including its own quiz and tutoring apps. Schools can leave it at that or can then work with iSchool to configure access to third-party education apps, picking and choosing which apps they want to use as they go.

While there’s plenty of demand among schools for an end-to-end, hardware + software learning environment, this kind of solution doesn’t come cheap. iSchool Campus prices its services at between $400 and $600 per student (per year), which comes with a three-year contract. So, if an average public middle school has 500 students, that’s $300K/year (on the higher end of the pricing spectrum). With that cost, schools, districts, and states are obviously going to (as they should) take a long, hard look before signing that contract. 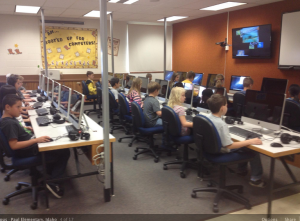 iSchool covers a lot of its bases in terms of a diversity of hardware options, but it’s all about how the product stands up. The company isn’t the first, nor will it be the only one, to attack this space. That being said, it requires a lot of legwork to build relationships with the government (subsidies) and hardware providers, and to sell CIOs, administrations, and decision-makers in districts and at the state level. The sales process isn’t short, all of which is to say that there’s not exactly a low barrier to entry here.

That may work in the company’s favor. It also helps, from the school’s perspective, that the company attempts to balance out costs by offering full technical, configuration and maintenance support. iSchool also claims that it can install its systems in about 10 days and does a lot of that configuration offsite and completes onsite work during non-school hours. But, again, with implementation requiring a lot of onboarding and training, the total cost could make some schools nervous.

The more the company is able to show that its learning system can have a significant positive effect on student outcomes, the more it will be able to assuage concerns coming from teachers and administrators. It also helps that states are increasingly instituting policies that encourage (and in some cases mandate) the introduction of digital tools and devices into the classroom. So the incentives for schools are growing, especially when they include subsidies, which works in iSchool’s favor. And, in the end, for education as a whole.