Mobile analytics and ad company Flurry today released a new report examining the global growth of the smartphone ecosystem, including which countries have the largest install base, which are growing the quickest, and how app usage itself is becoming more international. One of the most significant findings from the report is growth of the Chinese smartphone market, which is poised to top the U.S.’s install base early next year.

The current smartphone ecosystem includes three-quarters of a billion iOS and Android devices, per Flurry’s count, which are on track to generate revenue of $10 billion by 2012.  The countries with the largest install bases of iOS and Android devices are the U.S. and China, which are at least five times larger than any other market in the top 10. The U.S. has 181 million devices, and China has 167 million, says Flurry. The next largest country, for perspective, is the U.K., with 35 million devices. The rest of the list includes (in order) Japan, South Korea, Germany, France, Canada, Brazil and Spain. 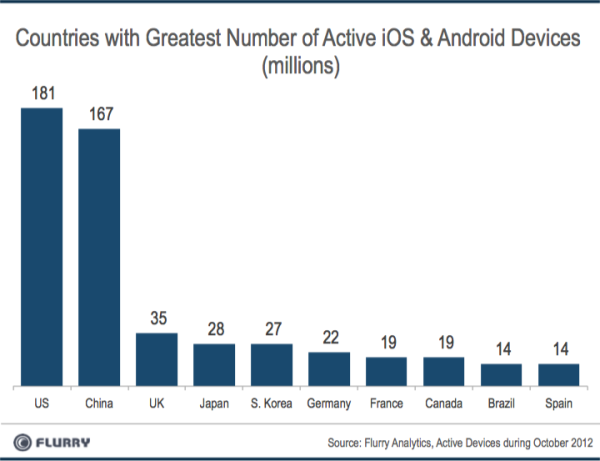 What’s most remarkable, however, is the rate at which China is growing. While the U.S. added 55 million net active devices since October 2011, China has added 125 million during that same time. Or, to explain that number with a bit more sizzle: that’s more than the current, active user bases of the U.K., Japan and South Korea combined. 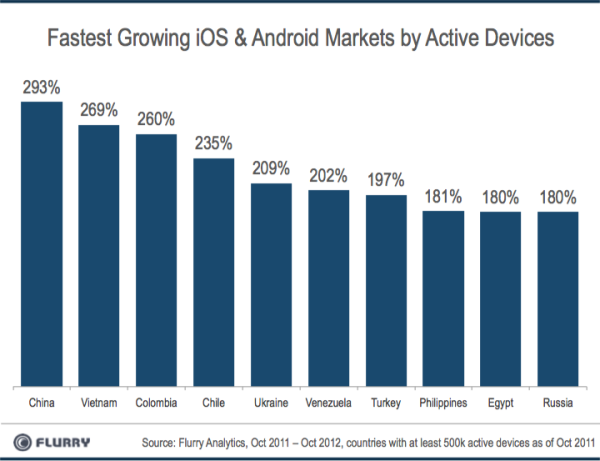 China is on track to top the U.S. total install base by the end of Q1 2013, Flurry predicts. The U.S., it seems, is nearing smartphone saturation, as growth in other countries explodes. Year-over-year (October 2011 to last month), China’s install base of iOS and Android devices grew 293%, Vietnam by 269%, Columbia by 260%, Chile 235%, and the Ukraine by 209%, in terms of the top five fastest growing markets with at least 500,000 active devices. Venezuela, Turkey, the Philippines, Egypt and Russia round out the top 10.

Colombia, Ukraine, Venezuela and the Philippines are new entrants in this list, it’s worth mentioning. In August, Flurry had performed the same analysis, but ended up with a different set of fast movers – again, in order: China, Chile, Brazil, Argentina, Iran, Vietnam, Mexico, Russia, Turkey and India. Notes Flurry VP Marketing, Peter Farago, the shift demonstrates the “shrinking global village” of the mobile ecosystem.

Perhaps even more to the point, the updated report also examined the distribution of iOS and Android app sessions worldwide, which shows a big drop in the U.S.’s presence as a proportion of app sessions. In October 2011, nearly half (48%) of app sessions were U.S.-based. As of October 2012, only 29% were. The rest of the top 10 (ranks 2-9) grew their portion from 27% to 39% during those months, and the rest of the world grew from 25% to 32%. Today, 71% of app sessions take place outside the U.S., says Flurry. 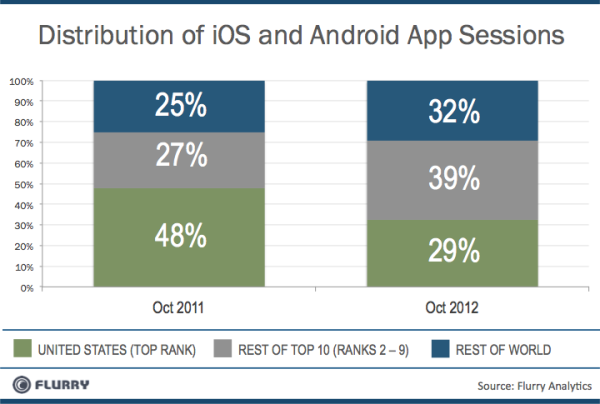 As for the data itself, Flurry pulled this sample from over 250,000 mobile applications it tracks, running on over 750 million devices worldwide. With its extensive coverage, Flurry estimates it can detect over 90% of all iOS and Android devices worldwide in a given month, the company claims. As of earlier this month, Flurry said it sees some 1.9 billion application sessions per day across iOS, Android, Windows Phone, BlackBerry and other platforms. The company is uniquely positioned to offer this level of insight because of its flagship product, Flurry’s analytics, which is offered for free to application developers – that makes it one of the most popular on the market.