Has being blasted with “Gangnam Style” whetted your appetite for Korean pop, but you have no idea how to delve more deeply into the genre? Eumakh is an online video platform with a sleek, user-friendly interface that makes exploring and discovering new Korean music videos easy for K-pop fans that don’t speak or read the language.

The startup is currently closing a $400,000 seed-funding round, with investors including Taipei-based venture capital firm TMI. It plans to make money through selling intermission video ads and merchandise using music videos as a sale mechanism.

Eumakh (Korean for music) features channels dedicated to current hits, popular groups and live performances, as well as a customizable music library and ticker with links to English-language news and blog posts about the Korean music industry.

Now in private beta, the site currently has 5,500 registered users, with 1,800 active weekly. Founder Johnson Goh says his team plans to launch Chinese- and Spanish-language versions of Eumakh to tap into the rapidly growing international market for K-pop. Goh says the team is “looking at South America very closely because a decent percentage of our users are currently from countries like Mexico, Peru and Brazil.”

Goh and co-founder Grey Ang are based in Malaysia but hope to set up their development team in Taiwan. The two originally launched a generic music video platform called AtticTV, but decided to focus on a website dedicated to Korean artists when they noticed a lot of activity in their K-pop channel. 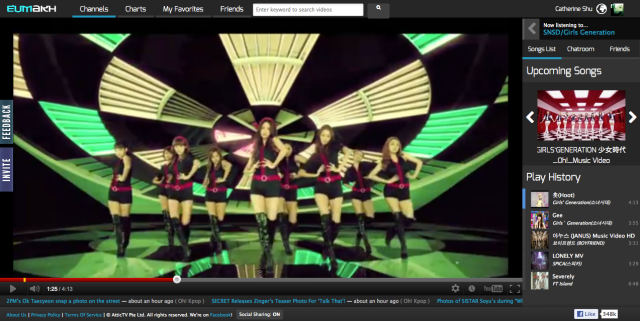 Eumakh uses algorithms to scour music blogs and YouTube channels for the newest and most popular K-pop videos and then divides them into different channels on the site. “We want to make Eumakh to go-to site for K-pop video content on the Web and other platforms” including mobile and Smart TV, said Goh. The team’s “ultimate vision is to create a News Corp or Viacom by mainly curating publicly available content in a manner that makes sense to users and fans of various genres,” including Chinese and Japanese popular music.