We’ve been covering couples app Avocado since launch, and in that time, it’s released a couple of neat features, including the ability to add photos to to-do lists and the release of an API that can be used by other couples app makers. But the team behind Avocado today is finally adding support for its most requested feature: a shared calendar.

The new calendar feature was built from the ground up and is designed to allow couples to share scheduling, and both receive reminders for events. The feature sends notifications to multiple devices so that users won’t miss important dates. The feature will also be available to developers using the Guacamole API for building similar apps. 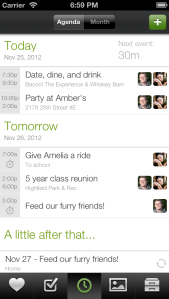 In addition, Avocado is also switching to a freemium business model: Instead of charging a nominal fee to install the app, now users will be able to download and start using it for free. But to take advantage of certain features, they can pay a yearly unlimited subscription for $19.99 a year. What will that get you?

Well, users who subscribe to Avocado Unlimited will be able to upload as many photos and lists as they want, while the free version will have limits set on how many its couples can share between them. Those limits will only pertain to things in a couples’ history, so new items won’t be blocked, but older photos and lists will fall off the app.

Co-founder Chris Wetherell wrote in an email that the business model was changed to put a bundle of features together that an up-front pricing model wouldn’t allow for. While paid users stayed longer and had greater engagement with the Avocado app, the team wanted to ensure that users didn’t have to pay for the app before it actually added value to its users lives.

Bonus for users who have already installed the app, or plan to do so soon: The yearly subscription portion of the app won’t go into effect until next year, so anyone who is already using it will be grandfathered in for life.

Avocado is just one of a number of apps seeking to make life easier between couples. There’s also Pair, Cupple, and SimplyUs, among others. The startup was founded by a husband-and-wife team of Wetherell and Jenna Bilotta — both former Googlers — and has raised $1.3 million in seed funding from Baseline Ventures, General Catalyst, Lightspeed Ventures, FeedBurner founder Steve Olechowski, and TV director Greg Yaitanes.