I was up in the Arctic Circle this past weekend, attempting to eat reindeer burgers, swim in non-existent ice holes and see the Northern Lights when we checked out a real, working Angry Birds activity park up in Rovaniemi, Finland.

There are just a handful of parks out around in Finland and China, but as we see below, that hasn’t stopped the CMO of Rovio, Peter Vesterbacka, from going all Mighty Eagle on some playground gear.

Let’s take a closer look at some of Rovio’s real-life game mechanics and compare them with Angry Birds on mobile.

While this is not a 1-to-1 port, it seems that the activity park is a fairly accurate representation of the iOS and Android Angry Birds experience. (Disclaimer: John Biggs totally wrote the captions for these. I am a lowly GIF-maker.)

Here is the wind up – the spinning will improve his speed and accuracy.

And there he goes. Notice the form: legs out, arms up, and ready for some clobberin’.

Off he goes, down the slide at a trajectory that will probably hit the glass, ice, and stone blocks in exact order, resulting in a flawless kill.

It looks like he got a pig! Peter rocks back and forth in jubilation, trying to knock the pig down from its lofty perch.

So how does this work with Rovio’s business?

Yes, Angry Birds theme parks certainly sounded crazy at the time the game’s maker Rovio announced them. But the word “crazy” and Rovio have been pretty much synonymous since the game was released in 2009.

Vesterbacka originally won his job by putting together a slide deck for the company’s co-founders Niklas and Mikael Hed and majority owner Kaj Hed saying the company could get to 100 million downloads. The company blew right past that and then went through 1 billion downloads.

Now Vesterbacka’s saying he wants Angry Birds to reach 1 billion fans a day, just like Coca-Cola. He says the game needs to be a “permanent part of pop culture.”

The parks are part of that strategy. “Think of the marketing that’s going to be here for the next 20 years,” Vesterbacka says, pointing at the fiberglass birds and pigs adorning all the play equipment. These real-world parks are tied into the gameplay. They show up on maps inside Angry Birds games (see the photo below), and if kids go and play at them, they’ll get special power-ups like bigger slingshots that help them in the game. 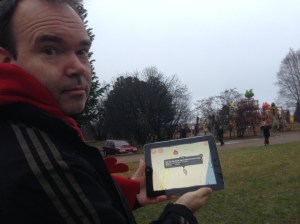 In keeping with the company’s unconventional route to emerging as a global brand, Rovio is taking a unique approach in its park strategy. Unlike Disney which is investing about $4.4 billion to build a new theme park in Shanghai, Rovio is taking a more grassroots approach. The Angry Birds parks range from something that would be more like your local playground to more expensive productions like one in Särkänniemi, which has actual rides and is only open during Finland’s long summer days. 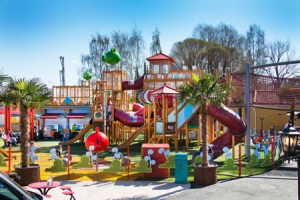 In fact, Rovio doesn’t really even have to spend capital on building these parks. Municipalities and local governments reach out to the company, and pay a nominal licensing fee to add Angry Birds play equipment to their parks. Vesterbacka wouldn’t say how much these licensing fees were, but Rovaniemi spent about 300,000 euros ($390,000) in total to build the playground above.

Rovio is partnering with a family-owned playground maker named Lappset, which has been making equipment for about 40 years for countries all around the world from Rovaniemi. That 450-person company appears to have benefited from the Rovio partnership, growing revenues to 57 million euros ($73.7 million) this year from 45 million euros ($58.1 million) the year before, CEO Juha Laakkonen tells us.

With the lower price point for these parks, Vesterbacka says that the company could quickly blanket China with hundreds of parks.

“It would take 200 years for everyone in China to visit Disney’s park,” he said. “But we’ll be in hundred of cities.” Disney expects to see 7.3 million visitors annually to its Shanghai park.

Many of the Angry Birds parks don’t charge entrance fees. Rovio benefits through low or zero-cost marketing and they’ll make money back through merchandising sales.

The company recently said that it expects more than half of its business will come from physical goods in the next few years.