At The Pool, a Los Angeles-based social discovery network that aims to be the anti-Facebook (and anti-Twitter for that matter), today announced it has emerged from beta and is in the process of closing a $1 million seed financing round led by Clearstone Venture Partners. Also participating in the investment are a bevy of Los Angeles-based angels, including Buck Jordan of Canyon Creek Capital and existing investors David Carter (a founding member of Amplify), and distinguished professor at UCLA and one of the fathers of ARPANET, Leonard Kleinrock.

As part of its public launch, the startup is also announcing some significant product updates, including a new home page and redesign, which shift the service’s focus from “The Daily Match” (the startup previously sent users a daily match by email based on location, history, interests and intent) to an action bar that allows users to navigate between activities, updates and notifications. The homepage now populates relevant content and updates that are unique to a member’s matches and interests — rather than email blast-style.

Founder Alex Capecelatro sees social networks making the world a little less social, with the Web at large becoming more of a barrier to social discovery than a gateway. Rather than connecting you to people you already know, At The Pool is on a mission to introduce you to people you’ve never met before, offline, taking the potential awkwardness out of the equation by matching you based on your interests. The startup is showing that the demand for yet another social network is already there, especially among young people.

Capecelatro wouldn’t share specific user stats, but he did say that the platform is now being used in over 50 countries and 25 percent of users return daily. In terms of demographic breakdown, 85 percent of users are under the age of 35 and half are under 25.

Given the success of interest-based social networks, Activities gets the biggest role in the new redesign, allowing users to post local activities they’re interested in, at which point the site serves them with relevant matches in real time. In turn, “Updates” focuses on a different aspect of social discovery, offering users the chance to see when their previous matches (and nearby members) modify their pictures or profiles, for example, while the “Notifications” tab provides updates on new pools, contests and affiliated events.

In addition, the startup is adding some localization support for its growing international user base — more than 175 countries — and has added a “Share Page” that allow members to invite friends to the platform and receive rewards and prizes for doing so. 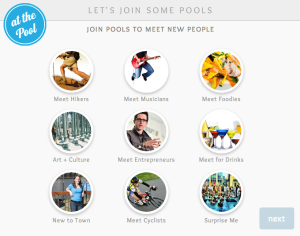 “It is refreshing to see the enthusiasm and innovation that the At The Pool team brings to the Internet by fostering the discovery and creation of close-knit communities of people whose off-line lives and interests are strongly overlapping,” says Leonard Kleinrock. “This capability is extremely appealing and long overdue.”

Like many other platforms, At The Pool users sign up for groups (or “pools”) based on their background, interests and the type of people they’re interested in meeting. At The Pool then provides the matches, and then the ball is in your court. New friends await. In this way, At The Pool feels like what you’d imagine the lovechild of Highlight, Match.com and Meetup to be. The big issue for the startup going forward, as it is with similar services, will be trust and security.

The possibility of meeting new people that share your passion for softball or Romantic poetry is exciting, but how can you be sure you’re not about to meet up with a creeper? At The Pool offers profiles and the ability to upload pictures, as well as Facebook verification and matching based on mutual friends, but this is either not the world’s most reassuring fail safe or you’re limiting your scope of potential “new friends” based on shared connections. Plus, you do get to talk to someone first for a little chat-based vetting before meeting them live, in 3-D. (Not that this goes all the way towards reassurance, either.)

Nonetheless, these kinds of worries seem to be the prerogative of older people, as the world’s young people are the driving force behind social gaming and the wacky, varied world of collaborative consumption, for example. Try getting your mom to put her apartment up on Airbnb.

While the site is free to use, it wouldn’t be surprising to see At The Pool explore potential monetization opportunities by offering, for example, an enterprise model, in which the service launches pools for companies, conferences, universities, non-profits, etc. Pay to enter the company pool, for instance.

It’s hard to say if the generalized (non-vertical) social discovery network can reach any significant traction, but few would argue that there’s demand for meet-new-people and serendipity apps. It seems as if we run across a new one each month. But it’s an important experiment in interest-based social networking, not to mention that it also helps to have a good-looking UI.