This evening at Andreessen Horowitz‘s offices in Menlo Park, founding partner Marc Andreessen sat down with William Janeway, recent author, to discuss “Capitalism in the Innovation Economy.” Janeway is a well-known investor and theorist in the investment and software world.

It’s a very small event, but the conversation is lively. It’s Q&A style, and Andreessen is firing off questions; clearly the two are pals and have a deep connection. The room will be able to ask questions at some point as well.

Here’s how Janeway began the talk:

Regarding “bubbles,” financially in technology, Janeway had some very interesting things to say. He spoke to the fact that once speculation hits the banks, when things are shaky, that’s when regulators tend to get involved. Janeway said “Like them or dislike them, if investment is involved, there will be bubbles.”

The interesting thing about bubbles is that it’s really important to think about why there hasn’t been a bubble in certain situations, like when it comes to “Cleantech/Greentech.” Janeway said “There’s going to be a lab before the low carbon economy becomes investable, and it’ll be frustrating.” When figuring out what to invest in, Janeway made it very clear that you only get great tech when there’s a hundred Pet.com’s and a few great companies. It’s how it works.

Whether you understand finance or not, the discussion taking place is extremely interesting. This is why there will always be a place for high-skilled and talented VC firms, because they understand how all of this works. In a new “innovation economy,” things are changing business quickly, such as intellectual property and software licenses.

The private sector has seen a lot of growth when it comes to innovation because of work done in the 1940s by the government. Janeway said that between 1945-50, the U.S. economy saw a transformation “…when we cut down on creating bombers, because there was simply no place to put them.”

What’s hot and still has room to explode? Healthtech. Janeway describes biotetch a bit with an anecdote: “In 1977, I got a call from Bob Swawson, who got turfed out of Kleiner Perkins, and was told to move over to something called Genentech. We got an early look at Genentech.”

How is this hot? It’s simple, according to Janeway: “There is a fundamental paradox that presents itself as an intellectual problem to solve.” When something can be solved intellectually, it’s ripe for investment and growth. 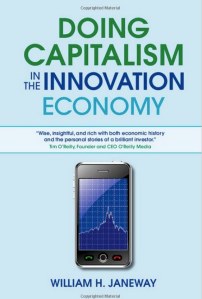 The two are playing a game called “Long or short,” with Andreessen firing off concepts to Janeway:

Silicon Valley: “It’s impossible to be short on Silicon Valley.”
VC as it is constructed currently: “Way short.”
YCombinator: “I think there’s room for that. I think that kind of model in the world of open source software — there’s room. I’m long.”
Technology R&D Hubs outside of SV: “Long on China. Bullish on what’s going on in New York. Bloomberg and Google have done a wonderful job.”

I asked Janeway: How do you feel about replicating Silicon Valley in other places? What advice or suggestions do you have for other areas to build their “own thing” based on the context of where they are, and their focus?

He said “It takes time to build a culture. The key thing with Silicon Valley was there was a notion that there was a sponsorship of Stanford, Bank of America, THE bank, and you began to get landlords that would take warrants than cash rent from startups. It took 25-30 years to get to scale.”

On advice to entrepreneurs now, Janeway said “Corporate happiness is positive cash flow. I’m told that there’s going to be more money of a certain kind accessible to you. It ends in a name that ends in “Ski,” and you don’t want that. The cheapest capital you can raise comes from your customers paying you more for what you sell than it costs you to produce it.”