Samsung may be be the world’s most popular smartphone brand, but in the influential U.S. market, Apple has climbed back to the top of the pack on the strength of its iPhone 5 sales. According to the latest figures from Kantar Worldpanel ComTech, the WPP market research subsidiary, Apple’s newest smartphone accounted for just over 48% of all smartphone sales in the country, letting it get past Android — which, across all the different devices running on the platform — accounted for 46.7% of sales in the last 12 weeks ending October 28.

But in Europe, Kantar points out that Android remains ahead of iOS by a pretty strong margin: in Germany it accounted for 73.9% of sales, and even more in Spain at 81.7%. Meanwhile, Italy continues to be Nokia’s strongest market in Europe, where the Windows Phone accounted for nearly 12% of sales.

In actual fact, the U.S. was the only market out of the ones covered by Kantar where the iPhone is leading over Android sales. Kantar’s full list is Great Britain, Germany, France, Italy, Spain, the U.S., Australia, Brazil, and (for the first time) Urban China.

Analyst Dominic Sunnebo tells me at across the 8 countries it surveyed, Samsung was the strongest single brand among smartphones, accounting for 27.1% of all sales, with Apple in second place and HTC in third.

“Samsung is continuing to dominate Android sales, though in the U.S. especially I would expect to see HTC make a strong comeback in the next 2 quarters with the release of its new 5” device [Droid DNA on Verizon], providing compelling competition to Samsung and Motorola,” Sunnebo tells TechCrunch.

Drilling down a bit more into what’s happening in specific regions, in China, Android accounted for 67.5% of sales in the quarter, with iPhone at just under 20%. Brazil continues to remain a strong market for Symbian with over 30% of smartphone sales attributable to the platform, although declining fast, as they already have done in other markets. Kantar will be adding Japan to its list to increase Asia coverage beginning in the next quarter.

Sunnebo notes that when Apple has a hit, in the past it has tended to sustain it through several quarters. The last time Apple overtook Android, he notes, was at the launch of the iPhone 4S, and it stayed in the lead for three consecutive quarters after that. It remains to be seen whether it can repeat that trick this time around, and whether we will see a delayed impact of iPhone 5 sales in other markets that would somewhat rebalance Android domination.

Some markets appear to still be a challenge for Apple and iPhone, he says. The messy patent fights against Samsung and Motorola in Germany seem to have done Apple no favors among the public.

“Germany remains a tough market for Apple with its share falling by 5.1 percentage points over the past year,” notes Sunnebo. He says that in contrast, Samsung’s Galaxy S3 accounted for nearly one-quarter of all smartphone sales in the last three months, and that this was the main reason for Android doing so well in the country.

It’s not really clear why Nokia and Windows Phone are doing so much better in Italy than in other markets — and why it can’t seem to replicate the growth elsewhere. It could have to do with specific operator deals in the country, and the fact that Nokia traditionally had considered it a strong market and that brand recognition had not totally eroded before Windows Phone’s launch. Specifically, Kantar says that the Nokia Lumia 610 was Italy’s fourth best selling handset and theNokia Lumia 800, the seventh best selling in the period.

As a point of comparison, Windows Phone (and by default Nokia) were taking less than 5% of sales in all the other markets covered by Kantar.

Brand loyalty may not be something Nokia sees much of these days, but Apple’s still playing that card very well. Kantar says that 62% of all iPhone 5 sales in the U.S. were from existing Apple owners upgrading, with 13% coming from Android switchers, 6% from BlackBerry, and a “small number” of first time smarphone owners. The latter is a very key segment and one that all handset makers should be targeting as penetration of early adopters nears saturation.

Loyalty will continue to serve Apple well: Sunnebo says that “92% of existing Apple owners in the US said they will choose an iPhone the next time they upgrade.” 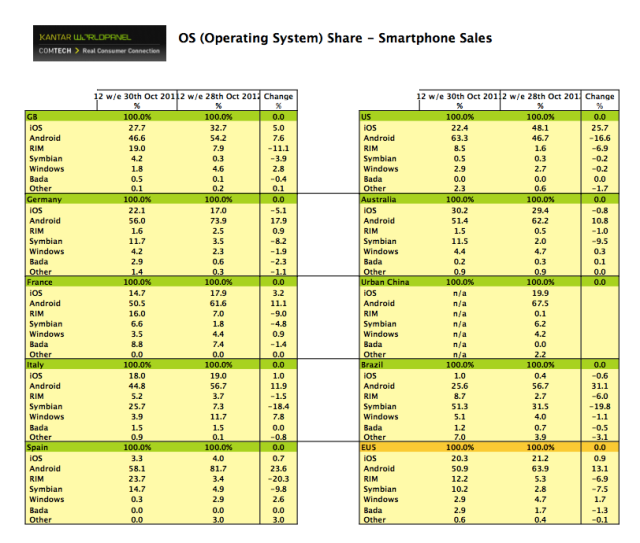