Editor’s note: Ross Rubin is principal analyst at Reticle Research and blogs at Techspressive. Each column will look at crowdfunded products that have either met or missed their funding goals.

Like a Kickstarter campaign, Apple’s embrace of technologies tends to be an all-or-nothing affair. The company was early to support Wi-Fi and now supports Bluetooth throughout its product line. However, it has remained at an arm’s length from technologies, such as Blu-ray, DLNA, wireless charging and NFC. Apple VP Phil Schiller has said it’s not clear what NFC is good for. The answer: lots of things, mostly having to do with initiating different kinds of transactions, including payments and Wi-Fi transfers. 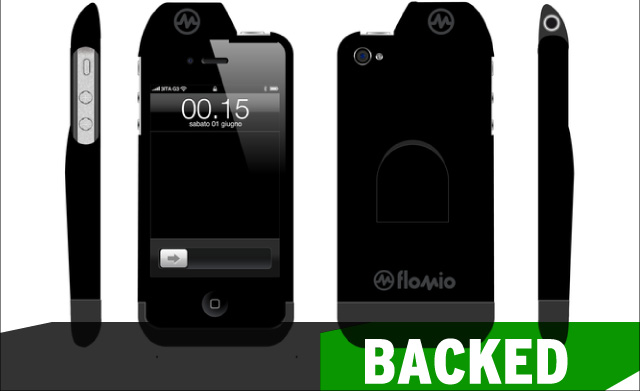 Some of those things should soon be possible with the aid of the Kickstarter project by Miami-based NFC wizards Flomio and its project FloJack. It’s not a device that enables you to track stolen boats with GPS. Rather, in the spirit of the Square credit card reader, it is a small white lollipop of a device that plugs into the headphone jack of mobile iOS or legacy Android mobile device and allows it to read and write data via NFC. The company has wisely avoided getting wrapped up in payments at this point, but it is supporting other NFC functionality, such as tag reading via Samsung’s TecTiles or its own similar Zapps.

The Flomio Kickstarter page includes a four-minute intro video that takes prospective backers through a cutesy “NFC party” in which iOS devices aren’t on the guest list, the standard CAD-drawing development segment and a concept “day in the life” where we see shoppers tapping FloJacks to access special deals. Still, the FloJack campaign started off slow, no doubt leading many backers to wistfully wonder, “Flomio, wherefore art thou?” The Kickstarter campaign has come down to the wire, with about $6,000 needed to reach the $80,0000 funding goal needed in the next 60 hours as of this writing.

When one breaks down the backers at this point, most have gone for either the $99 FloJack dev kit or the $49 FloJack pack for NFC enthusiasts. The real boost, though (half of the project’s funding), has come from three backers who have shelled out $10,000 each to have Flomio help them create NFC applications and a fourth who shelled out the same amount to have Flomio build them something while they take in a Miami Heat game and relax on the beach — nice work if you can get it done for you.

Like its longer-range radio brethren Bluetooth and Wi-Fi, NFC is best integrated not only into the casing of the phone, but into its operating system as well, which is exactly why Android and Windows Phone have taken that approach. Wi-Fi and Bluetooth USB sticks for laptops lacking those technologies proved that point, and the situation is even worse with a mobile phone, where a need for portability and personal style is at a premium.

Sweetening the deal and taking advantage of a Kickstarter campaign that enables owners to change rewards midstream, the clever Flomio team added a new option, the FloCase. This wraps a FloJack-style NFC reader/writer into an iPhone case. It makes for a far better solution in which you don’t have to be as concerned about the FloJack slipping out of or even breaking off in the headphone jack, which remains free for audio output.

Not only has Flomio been smart about its Kickstarter rules, but it’s also recognized that, for NFC to do anything, it must be supported with an SDK. Flomio’s works across platforms. However, at some point Apple will no doubt support NFC or something like it for transactions, and at that point Flomio will likely have to focus more on its own custom development work. Unil that time, though, developers may be willing to deal with a little protrusion from their iDevices in order to get a taste of at least some of the promise of NFC.