Google’s Nexus 4 smartphones have been selling like hotcakes, despite one big criticism being that the device does not support super-fast wireless broadband on LTE networks. But a video has emerged that apparently refutes that fact: You can turn on LTE on the device by way of a simple shortcode that you enter on the dial pad.

According to a video posted on YouTube by the Canadian blog Tekgadg (and embedded below), a user can type 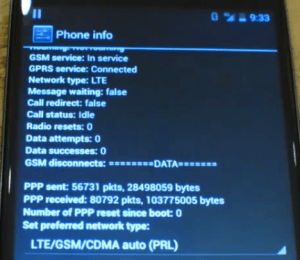 in *#*#4636#*#* as a phone number, which then brings up a menu of the phone’s settings. There, you can switch the phone from its default WCDMA-preferred mode to one that supports LTE. If the network that you are on offers LTE in the supported LTE band, it then comes up on the device.

This further speed test posted by user a1jatt on the XDA Developers forum appears to demonstrate his LTE-enabled Nexus 4 picking up speeds of up to 21Mbps on the Telus LTE network.

As Android Authority points out, the LTE, as demonstrated in the video, seems only to work on two LTE-enabled bands, 1700MHz and 2100MHz. These happen to be the frequencies used by carriers in Tekgadg’s home market of Canada: Rogers Wireless, Telus and Bell Canada.

That, and the fact that you need to work a little hack to get LTE working, are two possible setbacks. Some believe that this kind of a hack shouldn’t count as proper LTE support.

But for those looking for a workaround, or for thinking about what might be on the roadmap ahead, it’s a tweak of hope. We’re still trying to figure out if (a) this is really accurate and (b) whether the LTE will work on other frequencies.

We have reached out to Google about this, and a spokesperson has referred us to LG . So we are now reaching out to LG for comment and will update this post as we learn more.

For now, here is a list from Wikipedia of all LTE networks worldwide and what bands they work on. You can see that there are others markets where the 1700/2100 bands are used at the moment, including Japan, and some of the U.S. operators, including AT&T. And, as a commenter below reminds us, T-Mobile’s future LTE network in the U.S. will also run on 1700MHz.