In the battle of the mini tablets, the 8GB model of the 7-inch Nook HD undercuts the iPad mini’s price-tag by more than £100 — with a £159 price-tag vs the iPad mini’s starter price of £269. The Nook HD also offers a higher resolution than the iPad mini, with a 243 pixel per inch screen versus 163ppi for Apple’s mini slate. The Nook HD is powered by a 1.3GHz dual-core processor.

Of course, buying a tablet is far more about buying into an ecosystem than buying a slate-shaped slice of hardware — which explains the enduring popularity of Apple’s iPad. On the ecosystem front, the Nook tablets have access to the ~2.5 million books on the Nook Store, plus “a large selection of magazines and apps” (vs 275,000 native iPad apps, at the last Apple count). In early December the Nooks will also gain access to Nook Video: aka “a broad collection of popular films and TV shows available for purchase or rental”.

Barnes & Noble’s tablets are also competing with Amazon’s seven inch £159 Kindle Fire HD tablet in the U.K. Barnes & Noble notes that the Nook HD is more than a fifth lighter and a centimeter narrower than Kindle Fire HD slate, weighing in at 315g. The company also claims the Nook HD’s processor is “smoother and faster” than the Kindle Fire HD — claiming graphics processing is 80 percent faster. 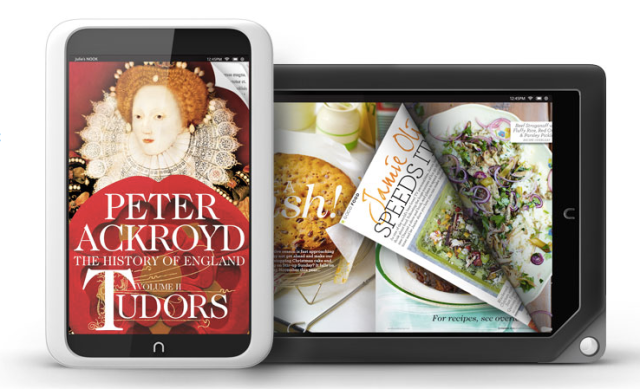