You’d think the last thing mobile users need right now is another digital mapping service — what with Google, Apple and Nokia all duking it out, alongside other established mapping companies such as TomTom — but Berlin-based Skobbler, which uses OpenStreetMaps data to power its map and sat-nav apps, reckons its ForeverMaps2 Android maps app can still carve out a niche.

As the name suggests, ForeverMaps2 is the company’s second effort to bring a maps apps to Android — following a brief porting of its original ForeverMaps from iOS to Google’s platform, back in 2011. Brief because the launch coincided with Google adding turn-by-turn navigation to Google Maps, says co-founder Marcus Thielking — making it harder for Skobbler to compete with only a pure online navigation app. The company focused instead on its iOS apps (including sat-nav app GPS Navigation 2) — and has more than 3 million app downloads on iOS.

Now, Skobbler is hoping paid-app ForeverMaps2 has enough tech firepower to survive alongside Android’s incumbent mapping service, Google Maps. The company is touting its app’s hybrid credentials which allow users to view maps both online and offline, meaning connectivity is not a prerequisite. “People do definitely look for a possibility to get a reliable navigation service that’s not dependent on Internet connectivity,” says Thielking. “We really do see that as a strong differentiator.”

The OpenStreetMaps data is also a key point of differentiation in his view. “It has this incredible amount of data beyond street networks,” he claims.

On top of that, Thielking says Skobbler’s underlying map engine technology is now solid enough to stand up against the big boys. He describes the new app as “five full technology steps” on from the original ForeverMaps app, and “so much smoother and faster” than rival mapping services.

“We feel that we have pretty much a map engine that is on the same level as Google’s — pure technology wise. And that’s way ahead of our competitors — the non-Googles, including Nokia by the way — out there,” he tells TechCrunch, adding: “We even have a shot at Google at this point because Google doesn’t focus on that so much at this point.” 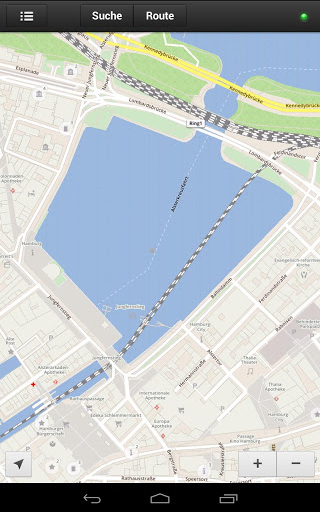 Skobbler is planning to add a turn-by-turn navigation feature to the Android ForeverMaps2 app in the not-too-distant future to further bolster its offering versus the big-name competition.

But regardless of whether Skobbler can convince Android users to download and use something other than Google Maps, Thielking says its app serves a purpose as a marketing “showcase” for what the company’s mapping service can do with OpenStreetMap data. The target here is to drive licensing deals with other companies. Skobbler’s technology is already being used by others — such as German speed camera app called Blitzer — but the company believes this part of its business has bags of potential.

“We have all this stuff that we can put on top of the OpenStreetMap and just make it work and that offers great value to other companies as well, so offering this easy access and this still versatile access is something that’s really interesting as a business opportunity for us,” he says. “That’s going to be the focus going forward for us.”

Berlin, Germany, 21st November 2012: skobbler today announces the worldwide launch of the exciting next generation of hybrid (online and offline) maps with the launch of ForeverMap 2, an innovative, forward-thinking solution that takes on Google Maps and rivals with a number of unique benefits and features.

ForeverMap 2 uses OpenStreetMap, a worldwide open-source project that has created the most dynamic map on the planet and one that is showcased through skobbler’s wildly popular GPS Navigation 2 software. ForeverMap 2 gives users a true choice over how they use maps, whether online or offline with full countries, continents, states and cities available to purchase as installable map upgrades, and all the time offers unprecedented detail and accuracy thanks to an ever-growing worldwide contributor base that’s closing in on one million users already.

Featuring skobbler’s newest generation of its advanced NGx map engine, ForeverMap 2 offers a number of advantages over the competition. Users get the ultimate choice in how they want to use maps: either online or with convenient offline map area upgrades for cities or entire countries. Alongside advanced map compression technology to cut down on the valuable phone real estate taken up by downloaded maps, this choice allows you to find the optimal balance of online and offline map use while leaving enough room for videos, photos and other apps. ForeverMap 2 also takes map software way past sole street-level focus thanks to OpenStreetMap’s outdoor data richness, allowing cyclists, hikers and pedestrians to find the most effective route to their destination. Users can bookmark places of interest to save key locations to the current map, access Wikipedia-based descriptions for sites of interest, and with regular, free map updates offers an amazing degree of detail and accuracy.

Alongside these benefits, ForeverMap 2 brings all of the functionality you’d expect from a high-end map solution, including address search, location finder, route calculation and an extensive POI database for both online and offline use through optional map downloads. Locations can be shared with friends and the “paperback-like” map experience offers cutting-edge map visuals alongside zoom, pan and turn controls, street names and a compass that can be set to orient itself in the direction of travel.

“We believe that our great experience with OpenStreetMap puts us in a unique position to offer modern smartphone and tablet users a powerful alternative to rival map services,” says co-founder of skobbler, Marcus Thielking. “ForeverMap 2 is the most powerful hybrid map solution on the market, allowing users to choose exactly what they want to view and how they want to view it: OpenStreetMap’s rapidly growing contributor base, which is closing in on one million users, enables us to provide the most dynamic and accurate solution on the market.”

Businesses and developers can also benefit from the technology fueling ForeverMap 2 (and GPS Navigation 2) through skobbler’s GeOS map access technology for both web and mobile. GeOS allows developers to implement OpenStreetMap into their services, providing them with a more versatile, independent alternative to Google Maps and other platforms while enabling features such as zooming, colouring and panning and dramatically reducing the complexity of working with raw map data.

“We’re already working closely with a number of large corporations to help them integrate OpenStreetMap into their products and services via GeOS,” says Thielking. “Having achieved status of bestselling navigation app for years-on-end in Germany and the UK and #1 position in over 20 countries with GPS Navigation 2, we’ve proved that our innovative technology solution is ready and able to meet the demands of today’s consumers and service providers. We believe that we’re well-placed to offer similar benefits to businesses that are looking for an alternative to Google Maps and other rivals.”

ForeverMap 2 is available now for Android via the Google Play store priced at 69p, and users will receive online worldwide maps for free alongside an offline map of their choice as standard. Other maps are available for offline use via in-app purchases. Prices start at 69p for Cities, Countries are £1.99, Continents £3.99 and a map of the World costs just £7.99.