Since we first covered its launch back in February, Crowdtilt has been on a mission to become the easiest way for groups of people to collaborate around money, specifically fundraising, for any cause. In other words, Crowdtilt wants to become the go-to platform for the many types of group fundraising that don’t (or can’t) happen on crowdfunding platforms like Kickstarter. Want to raise money for your friend’s 30th birthday party in Las Vegas or get your softball team together to pay for new jerseys and league fees? This is where Crowdtilt thinks it provides value — by being crowdfunding’s resident generalist.

As the startup has moved forward, however, it’s discovered that many of its users want to help raise funds for charitable causes, like Hurricane Sandy relief projects, for example. To support the growing number of individuals and organizations looking to raise money charity, Crowdtilt today announced that it has enabled tax-deductible donations for 501(c)(3), or non-profit, organizations. As part of this, Crowdtilt is now able to send tax-deductible receipts for donations made to campaigns automatically, and the company believes it’s the first crowdfunding platform to do so.

What’s notable about this addition in comparison to other crowdfunding sites is that users can continue to use the platform for any groupfunding initiative, but if they’re looking to raise money for a non-profit, they can search through Crowdtilt’s roster of registered 501(c)(3) organizations to find their cause of choice. If an organization’s campaign raises its target amount — or “tilts,” as the company calls it — Crowdtilt releases the funds to the non-profit within a day for no additional fee.

This is huge for non-profits, which are typically subject to having to wait for donations until middle men disburse the money on the 15th of the month, skimming money off the top with handling fees or carrier fees and the like.

Instead, non-profits only pay a 2.5 percent fee — the same transaction fee that everyone else pays. So, for that relatively small fee, Crowdtilt now provides a hosted fundraising page, underwriting and credit card processing within a few seconds of starting a campaign, and for non-profits it provides tax-deductible receipts for free.

Not bad, especially if one compares it to general crowdfunding platforms like Kickstarter, which doesn’t support charity fundraising, or Indiegogo, which doesn’t offer tax-deductible donations. In turn, these sites have 7 to 9 percent transaction fees, [Note: Additional text added after publication] whereas the cause-specific and popular Movember, for example, allocates about 82.3 percent of its funds raised to its charity programs, including The Prostate Cancer Foundation and LIVESTRONG (with that 17.7 percent consisting of fundraising costs, administration costs and retained funds, although Movember claims an overall “global fundraising and administration cost to funds raised ratio of 8 percent”) — all of which, in short, makes Crowdtilt’s 2.5 percent look pretty good in comparison.

[Note: For those interested in a further comparison, in the online non-profit fundraising/giving space, there’s also Crowdrise (which has about a 4.75 percent transaction fee and some addition charges depending on the plan a charity selects), Causes.com (which uses Network For Good to process its transactions and comes with a 4.75 percent fee), Stay Classy (which offers fundraising software for non-profits and starts with a 3 percent fee, plus $49/month and goes up from there) and a number of others, including Network For Good and Donors Choose.]

Co-founder James Beshara tells us that it took the company about 11 weeks and almost $30K to go through compliance and offer tax-deductible donations. Having worked in the non-profit world, Beshara says that he’s become keenly aware of the lack of services online that donors can use to support non-profits of their choice and actually provide tax-deductibility.

So, in spite of the time and capital investment to meet compliance, Beshara hopes that his personal mission to support non-profits pays off in a deeper fundraising experience. And because donors cover their own processing fees, Beshara thinks that this creates a structure that provides greater value for non-profits.

It also has the potential benefit of setting the table for a greater consistency in large donations, which means more revenue for the startup and more support for non-profits. Typically, donors are going to hesitate to give $500 or $1,000 if they aren’t receiving tax deductibility for their donations, but now that donators will only pay if the campaign reaches its proposed goal and get to take advantage of tax deductibility, this could be a boon for bigger campaigns — and donations.

On top of its new support for non-profits, Crowdtilt aims to differentiate itself from its competitors through its built-in social network, which allows campaigns to be easily shared with friends on Twitter, Facebook, etc. The other key is that, because campaigns are usually started among friends or groups of people with similar objectives, participants become active advocates for each fundraising initiative and do as much as possible to help the campaign reach its goal. As a result, Bashara says that campaigns typically raise 188 percent of their proposed goal and that users raised $1 million (across campaigns) during its first three months. 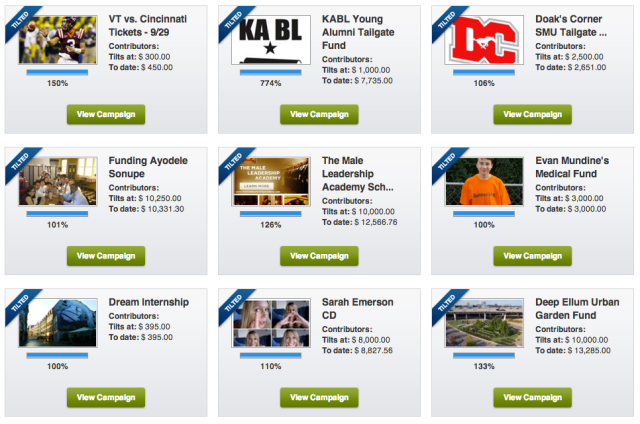