SumAll has raised $6 million in a Series A for its data connection service that analyzes and visualizes information from Instagram, Google Analytics and a broad range of other services. The investment round was led by Battery Ventures with the participation of Wellington Partners.

With the funding round, investors have agreed to give $500,000 to the SumAll Foundation, a charity the employees have established to enrich people’s lives through data.

CEO Dane Atkinson said in an email interview that employees have contributed 10% of their holdings in SumAll to the charitable trust that will leverage the skills of the analyst team.

The investment comes as a new market emerges for increasingly sophisticated connected services that use the data from multiple sources to make sense of a customer’s business and in SumAll’s case, predict the ROI on everything from Instagram photos to Google Analytics.

Its latest data connections come through Authorize.net, a provider of payment gateway services. The new integration will allow customers to analyze credit card data to better understand the behavior of its customers and then correlate that data with web analytics and data from social networks such as Twitter.

At its core, SumAll banks its value on its data visualization, which shows the data and how it compares across different services.  SumAll now integrates with Facebook, Twitter, Google Analytics, eBay, Amazon, PayPal, Stripe, Authorize.Net, Braintree, Instagram, Shopify, Big Commerce and Magento. 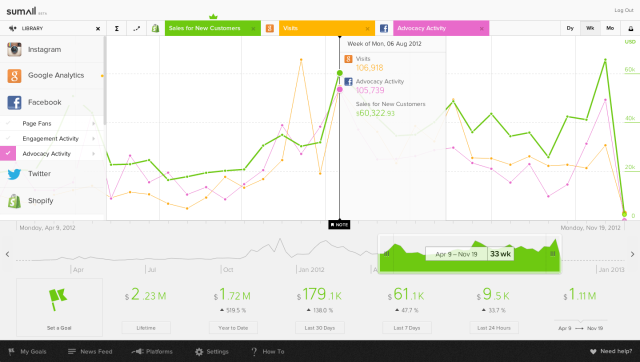 SumAll has 25 employees, all based in its New York City headquarters, and will likely hire another 20 data analyst types in the next year.

SumAll’s value compares to services like Chartio, which I profiled last week. Chartio also pulls data from third-party services and a company’s databases to create charts, bar graphs and other visualizations.

It’s these connected services that will emerge as the new leaders in business intelligence. SumAll cites examples of companies pulling in data from six different Google Analytics accounts and then mapping that data to different social accounts. That capability will become the new normal in the months and years ahead.

But the future is not all filled with pretty charts and graphics. This space is filling up with competing vendors such as Chartbeat and Socialbakers. And then there are the lumbering giants of the enterprise world. These are companies that do billions in revenues. MicroStrategy, Oracle and IBM just to name a few.

The charity angle is a unique one. Data is a new currency that in itself can be the catalyst for helping people. Kudos to the SumAll team for making such an effort to develop something that they can use to give back to people in any number of different ways.